Service Dog Running For Hero Dog Of The Year 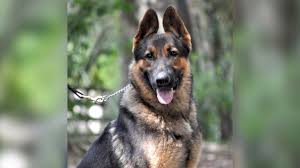 Some have four legs, fur, and help veterans.

Meet Nick: Nick was paired with Jody, a veteran of the United States Army and Navy in January 2019. Jody suffers from Post-Traumatic Stress Disorder and Nick, his service dog, helps him mitigate the symptoms.

“Guardian Angels is proud to have two additional service dogs nominated for this year’s American Humane Hero Dog Awards. This award is known in the service dog industry as one of the highest honors available, particularly for an organization like ours which trains these dogs,” said Carol Borden, CEO of Guardian Angels Medical Service Dogs. “Our dogs play a critical role in providing our recipients with a ‘new normal,’ where they are able to reintegrate into society and navigate life with their disabilities in a way that was not possible before their pairings.”

After Nick was paired with Jody, his blood pressure dropped by 80 points and was able to sleep for six consecutive hours, something he hadn’t been able to do in months.

Two months later, Nick was able to get the alert out that Jody was having a heart attack. Then months after that, he alerted medics of an impending stroke.

Since being paired with Nick, Jody has now been able to excel at work, take public transportation, and spend more time with his family.

Nick is up against another Guardian Angels Medical Service Dogs dog, Rhino, who is in Grand Junction, Colorado.