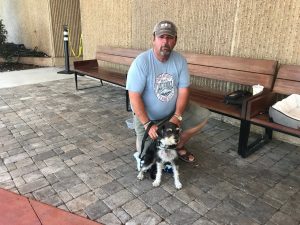 A PTSD service dog named Scrappy who was reported missing last week in Memphis has been found safe.

Scrappy’s owner, Randy Holmes, said he was driving through construction traffic on U.S. 78 south of Shelby Drive in the afternoon of July 14 when his companion disappeared.

Police said the windows were rolled down, but Scrappy — who was wearing his service dog vest at the time — is so well trained that he wouldn’t have jumped out on his own.

Holmes expressed concern to police that someone may have reached into his SUV and snatched Scrappy while traffic was at a standstill, but there were no suspects at the time.

After the story aired on WREG last week, Holmes and his girlfriend received several sighting reports in the area of Jackson and Ayers. The pair had been searching the area for the dog when he was located Monday morning behind a Family Dollar store.

The little dog had lost some weight and had a scrape on his hip, but is expected to be okay. He even enjoyed a treat of Vienna sausages that were given to him by the woman who found him.

Holmes said he still doesn’t know how Scrappy ended up where he was found. He was just thankful his dog was discovered safe.