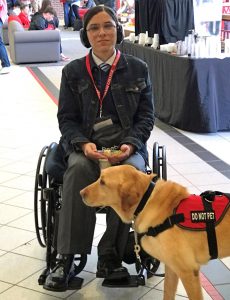 Hawk Ricketts and Tanner had been pals since Hawk was 9.

Hawk was just a boy and trapped in his own world then, and Tanner was a newly trained service dog who opened the rest of the world to his very own boy who has a sensory processing disorder.

The community paid for Tanner through fundraisers and rallied to fund an emergency surgery for him a few years ago.

Tanner passed two days before Hawk’s birthday, and Hawk was already grieving the loss of his father to a long-term illness in December.

But, despite his grief, Hawk, who lives in Zionsville, wants the community to know he’s grateful for the life altering gift of Tanner.

“This is one of the hardest times of my life,” Hawk wrote in an open letter to the community. “It is with profound sadness and gut-wrenching heart that I want to let everyone know that I’ve had to say goodbye to my best friend, Tanner.

“Tanner introduced me to the world as each of you knows it,” Hawk wrote. “I was 9 years old when Tanner walked into my life and took his rightful place beside my (wheel)chair. He helped me navigate life and conquer my fears. Having him by my side has meant independence. With Tanner, I became ‘Hawk the Brave.’

“Tanner loved everyone, and I am forever grateful for all the love and kindness everyone showed him. … Please send up a prayer that my best friend has arrived safely in God’s heaven.

“I don’t know how to navigate through life without him. I am crushed. …”

Hawk and Tanner completed high school with high honors in June 2019 and just completed their freshman year at Wabash College, where Hawk attended on a dean’s merit scholarship.

Tanner was showing signs of his advanced age, such as arthritis, and wasn’t quite up to working on campus from 8 a.m. to 11 p.m., Hawk’s mother, Brenda Ricketts, said. They bought boots for the dog when his feet got cold from walking on concrete last winter.

“It was the funniest thing to watch him walk in boots,” Brenda said. “It was hilarious. He was such a comic.”

Hawk and Tanner had already volunteered at the Children’s TherAplay Foundation during high school. And Hawk and Brenda were beginning to think about letting Tanner retire to a nursing home where he loved to visit and entertain residents.

Hawk is too aggrieved at present to discuss another therapy dog, Brenda said, but she knows he needs one, and friends are encouraging her to begin looking.

She does not have funds for a new dog. Tanner cost more than $10,000 and came from Northern Indiana Service Dogs. Plus, that organization won’t have one available for months, or maybe a year, Brenda said. It takes up to two years for some dogs to be fully trained.

Hawk wants his next dog to also come from NISD, and Brenda hopes a solution will arise by the time Hawk needs to return to Wabash.

Hawk is on the medical track academically and participating in an Eli Lily summer work program that is online this summer because of the COVID-19 pandemic. It’s good the program is offered online because Hawk is immunocompromised, his mother said.

She’s unsure if Wabash classes will resume in person or online in August and hopes Hawk can study online so they have more time to find a suitable new pal for him.

“Because of Tanner, Hawk was able to do everything he did,” Brenda said. “He was the greatest gift. He opened Hawk’s whole world up and provided so much independence for Hawk.”