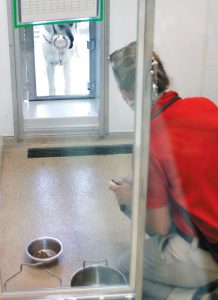 Shawn Pederson, Army Sgt. First Class Chuck Stewart and Senior Master Sgt. Diana Trevino — it is these honorable servicemen and woman and many others like them that are deserving of our salute today.

All across the country, veterans are being honored on this annual Veterans Day, Nov. 11. At a 10-acre plot of ground in Lenoir City, a new training facility is being unveiled that will provide helpful companions for those veterans coming home with physical and/or psychological challenges due to their service to country. Smoky Mountain Service Dogs held its grand opening ceremony Nov. 2 in Lenoir City on its $1.3 million facility that will allow this nonprofit to continue its mission of training mobility assistance service dogs to U.S. veterans at no cost to them. Due to COVID-19, the ceremony to unveil the Veteran/Canine Training Center wasn’t open to the public.Pederson, Stewart and Trevino are three of the 40 veterans who have received dogs from the organization so far. Founders are Mike and Suzy Kitchens; Mike is a Vietnam veteran and Suzy is a graduate of Everett High Schools, born and raised in Maryville.

The trained canines have names like Cade, Dagger, Spirit, Nitro, Dolly and Gauge. Four-footed heroes with wet noses some recipients have said.

After two and a half years of planning, fundraising and building, SMSD is moving from its original 1,000-square-foot home and into one with 7,500-square-feet and state-of-the-art equipment.

The facility includes an area where meetings can be held, office space for SMSD’s trainers and program manager, large dining/meeting space and most importantly, training space and 18 kennels for housing the dogs. The property also allows for five exercise yards. While a grand opening ceremony was held Nov. 2, the dogs will be moving in sometime around the end of November.

The veterans who are accepted into the program come here for training with their dogs. During this pandemic, Program Manager Heather Wilkerson devised an online educational program to cut down on in-person time. Training with the veterans lasts for two weeks.

Sometimes it’s the little things that bring the most joy, like having a dog grooming area complete with commercial washer and dryer and a bath tub. A high pressure water system will allow for sanitizing the kennels. All inside will be comfortable with air conditioning and heating. This new facility also has a medical exam room.

Each time a veteran and his or her dog completes the program, SMSD holds a passing of the leash ceremony for all who played a part in the successful training. In past years, the ceremonies have been held at a church in Tellico Village, but COVID-19 put a stop to that. The ceremonies are now being held at the new SMSD facility, Suzy Kitchens said. It is a more intimate setting with fewer people, she explained. All of this is done with only five paid staff members: Program Manager Heather Wilkerson, trainers Susan Randall, Cassie Krause, Laura Porter and facilities manager Darrell Wilkerson. Suzy Kitchens volunteers as veterans liaison. Mike Kitchens is volunteer chair.

The Kitchens founded the nonprofit in 2010 and placed its first dog in 2013.

On a recent day, Randall was training one of the golden retrievers, Hondo, in the new kennel. SMSD gets puppies when they are only 8 weeks old. Training takes two to three years. Puppy raisers assist with initial behavior training before the certified trainers take over.

“We train six to seven a year,” Suzy Kitchens said. “We have hit that mark every year for quite some time. Now with our new place, we can do 10 to 12 dogs per year.”

The cost of the training is $25,000 per dog, she added. They mostly use Labrador Retrievers.

Because SMSD is a regional facility, it provides service dogs to veterans across eight states. It is one of 70 nationally accredited service dog organizations in the U.S. and one of 185 internationally, Kitchens said.

Accreditation must be done every five years, and this was SMSD’s year. The onsite inspection was held days ago. “We passed with flying colors,” Kitchens said. She said being accredited is important because the VA has a service dog benefits program. Those benefits are only given to veterans who have dogs trained by an accredited member, she explained.

Fence building was being completed this week. Darrell Wilkerson said the original completion date for this project wasn’t met due to weather and other setbacks. The groundbreaking, he said, was held in May 2019.“The trainers were working in an area that was the size of one of these rooms,” he said. “It’s been a long time coming but this is huge.”

Suzy Kitchens was quick to point out none of this could have been done without the help of Blount County and others. Altar’d State, headquartered in Maryville, funded the kennels and has its name on the facility. The conference room is named for the late Gary Lindsey, an avid fisherman who resided in Blount County. Several other partners have come into this circle to help, Kitchens said.

The large volunteer base is crucial, too. Kitchens said they have 170 who donate their time.

Over the years, Kitchens has heard back from veterans about what it means to have a canine companion on those bad days. Depression can set in. Physical limitations can be overwhelming. Kitchens said one Vietnam veteran had all but given up.

Before he got his service dog, he didn’t think he would live beyond a year or two, Kitchens said. “He told me, ‘After I got my dog, I wanted to live life more than I ever have.’”

Another veteran told Kitchens about having nightmares. He said his service dog inched his way closer and closer to him until he awoke out of the nightmare, even licking his sweat.

It’s now time to focus on the future and what SMSD will be able to do for more of this country’s veterans, Kitchens said, looking around at what has been accomplished.

“Now that we have built this, the mission continues with our sustaining partners,” Kitchens said. “We have achieved our goal of building a new facility and now we can sustain the mission.”