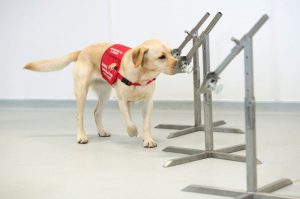 During the coronavirus pandemic, it has been a challenge for service dog trainers to properly acclimate dogs during their advanced training.

“It really was a set-back in not being able to get the dogs out and about,” said Peggy Law, Executive Director of Service Dogs of Virginia.
She is currently training six of the program’s ten dogs, and says stay-at-home orders and closures amid the pandemic have caused problems.
“They’re at a stage in their advanced training where what they really need is to be practicing their skills out in public,” Law said.
Getting the dogs acclimated to the general population is a big step in their training.
“There’s just so many sounds and sights that we take for granted but can be very intimidating for a dog,” Law said. “There’s being comfortable, and then there’s also being able to think clearly and to work.”
Typically, a trainer would take a dog anywhere a future owner would take a dog, including the airport. Now, it’s not so easy.
“We have to be able to take them everywhere that their client wants to go,” said Sally Day, Director of Development for Service Dogs of Virginia.
Service Dogs of Virginia’s Albemarle Square location was closed until mid-June, when it reopened part-time. This left future dog owners unable to meet potential future dogs.
“We also want some of these dogs to meet clients and we haven’t been able to invite clients to our facility during the pandemic,” Law said. A dog typically takes two years to train, but that time line may now be extended.
“Because of the pandemic and because of being home, they may end up being longer than two years, it’s possible,” Law said.
As businesses have reopened, Service Dogs of Virginia has begun taking service dogs out again for training, but trainers are careful about where they go and how long they are out in public.