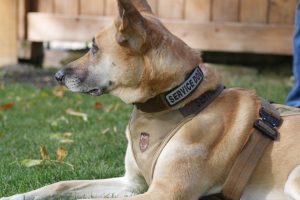 People like John Dugas know how life-changing service dogs can be. Dugas, a St. Albert resident and the chairman of Courageous Companions, uses his own service dog, Bailey, to help him with mobility assistance and symptoms of PTSD.

Dugas is also a 30-year veteran who served as a combat engineer. Eventually, Dugas’ work life weighed on him to the point where, every day on his way home, he would pull into a gas station parking lot and sleep for 10 minutes.

“You’d put this mask on, I call it, to kind of hide what’s going on,” said Dugas.

“I found I just became a recluse in my own house, I would stay in my garage and wouldn’t engage anyone.”

After a doctor suggested he try working with a service dog, Dugas applied to the Courageous Companion program and was placed with his first dog, Mia, three months later.

Dogs play an incredible role in so many people’s lives. Sometimes, they’re even considered as best friends or part of the family. Service dogs, however, play another engaging role: as a support system for those who live with post-traumatic stress disorder (PTSD), such as veterans and first responders.

Last weekend, Walk for Veterans, an event supporting veterans throughout Canada, gave its support to service dogs by donating its proceeds to Courageous Companions, a non-profit organization that provides service dogs to first responders, men and women in the military service, and veterans.

“This year, we’re putting (the proceeds) towards Courageous Companions so that people can get the dogs they need, because these (dogs) are so important. And this year especially, we wanted to do something that was centred around not only veterans but veterans and first responders,” said Chance Burles, Edmonton’s organizer for the walk.

“Out of all years, we saw just how important first responders are to our lifestyle and we wanted to really highlight that.”

Courageous Companions is an organization completely supported by donations, and service dogs can cost up to 20 to $30,000.

“Some legion branches will fund a (service) dog, some will not. Veterans Affairs won’t fund any dogs, the government won’t fund any. So they leave it up to charities to go out there and raise the money to do that,” said Dugas. “It’s always a challenge. You can have a barbecue and raise $600 but at 20 grand a dog, that’s a lot of barbecues.”

A secure support system is imperative for those who deal with the everyday challenges of PTSD. Now a retired master corporal, Burles is a veteran who served for eight years in the military. He was diagnosed with PTSD in 2012, and after a year of exhausting doctor’s appointments, he finally found the right fit with one doctor practising equine therapy. Burles grew up around horses and working with them made perfect sense.

“When you’re working with a horse, they can see and feel the immediate changes in your chemistry,” said Burles.

“One of the neat things is you could be doing a walk-through with your doctor on one of the traumatic events that you’ve been through, and the moment that you start to fade into a flashback, or you start feeling the emotion start to pick up, that horse will engage.”

It takes a special kind of animal to offer the right connection and support needed by those who live with mental and physical disabilities. That’s why the training process at Courageous Companions is thorough to ensure handlers and their dogs are perfectly matched.

Training is specialized to accommodate the handler’s needs, and a dog must be able to perform at least three tasks to become a service dog. Tasks can include grounding, space management, distraction and even waking handlers from a nightmare or detecting high blood pressure.

Burles recalls a time when, at a Walk for Veterans event, one veteran stood backed up against a tree, wide-eyed, with his service dog by his side. The dog was touching the veteran’s hand to distract him. Burles walked up to shake his hand and thank him for coming out, when the veteran told him it had been the first time out of his house in two years.

Burles explained it was the service dog, and being surrounded by other veterans, that kept the man centred enough to be there.

“It was difficult, but it was still within his realm of accomplishment and management by having that dog there,” said Burles.

For many of those who deal with the effects of PTSD, being in crowds and public places can take a great amount of courage. The Walk for Veterans event offers an encouraging environment for those individuals to take that brave next step, and to talk comfortably about their experiences.

“When you sit and you start talking about really dark things, the world starts to close in on you and you’re stationery, and it’s that much more challenging. But if you’re up and walking and people are moving with you and they’re talking and nodding, it becomes a much more fluid, easier way to talk,” explained Burles.

This year, the Walk for Veterans was virtual. Participants walked from various spots across Edmonton not only in support of each other but also in support of the service dogs that help change so many lives. The tally for this year’s fundraiser hasn’t been posted yet.