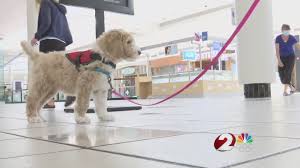 Through an empty Mall at Fairfield Commons, little paws trot and gallop around Monday afternoon. Service dogs in training, this litter is getting to know a new environment.

“Our greatest need is the for the puppies who have never been able to experience a big environment and so it’s a safe way for our staff to be able to give them what they need socialization-wise while still being able to keep themselves and others safe during this really weird time,” said Erin Bittner, director of socialization and genetics at 4 Paws for Ability.

The Mall at Fairfield Commons is closed to shoppers but stepped up to provide 4 Paws for Ability a space to continue their puppy socialization training.

“We love it when they come to visit,” said Leanne Rubosky, general manager at the mall.

“They didn’t have a place to train when all the mandates came down so we offered if they were interested and they were very interested in continuing to partner with us while we were closed,” Rubosky said.

She said, “My main role is a goodwill ambassador to the community and to find out how we can serve our neighbors well. This gave us a great opportunity to be able to do that.”

The mall provides new smells, sights and sounds to train the pups.

“The space really echoes. Glass barriers are something they only get in this type of environment, the different changes in floor textures, the open staircases,” said Bittner.

This will help them later down the line when they are placed with a family. Weekly mall explorations gets them comfortable with the unfamiliar.

“As a service dog if they have an experience they’ve never had, they have enough in their memory bank that they’re like- this is probably great too,” said Bittner.

4 Paws is for Ability said COVID-19 is prompting them to make major changes to their operations. Through it all, their partner are helping in any way they can.

This partnership with the mall ensuring they can keep on with their mission.

“We want to make sure that we have all these positive experiences so that in life as a service dog, it’s regular, it’s normal,” Bittner said.