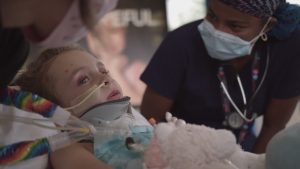 Six-year-old Memphis Rose Hamman was paralyzed from the neck down after a fatal car crash in Wellington back in June.

Memphis lost her great-uncle, Kenneth Graden, in the crash near Lake Worth Road when a driver crossed the median and hit Graden’s car head-on.

Meade was also in the vehicle when the crash happened.

“With something like this, there’s just no understanding,” Meade said. “You can’t understand it.”

Memphis still has a long road to recovery ahead of her, but to make life a little bit easier, several local foundations teamed up to unite her with her four-legged service puppy, Juliet.

“This is what we’re all about, locals helping locals,” Lori Griffith from the Chasin’ A Dream Foundation told CBS12 News.

Griffith first received a call from Memphis’ family after the crash and was able to connect them with the team at “Furry Friends” who happened to receive a new service dog for training on the exact same day that Memphis was injured in the car crash.

“She’s always just had such a soft spot for dogs,” Gayrene Meade, Memphis’ mother told CBS12 News. “When she found out she could have one – I mean to see that smile on her face, there’s nothing better. ”

The puppy will report to a training “boot camp” for the next year while Memphis undergoes rehab at Shriners Hospitals for Children in Philadelphia.

A donor from Jupiter donated nearly $40,000 to pay for Memphis and Gayrene to fly to Shriners next week, but the family’s medical bills are sky high.