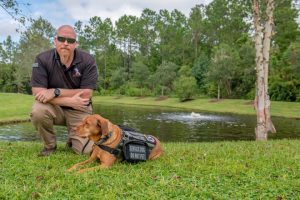 The U.S. Department of Transportation has put an end to the growing number of travelers claiming mini horses, monkeys and other non-traditional “emotional support” animals should be allowed to travel on airplanes with their owners.

The trend began several years ago and was pushed to the fore in 2018 when a woman attempted to board a flight out of Newark International Airport with a peacock in tow. She was refused passage.

“It just showed how ridiculous it had become, how out of control it had gotten,” said Rory Diamond, CEO of the Ponte Vedra Beach-based service dog training organization K9s Warriors. “For [veteran] warriors like ours, this made travel a nightmare and nearly impossible. … We work very hard on making our warriors’ world big again, and this was making it smaller.”

On Wednesday, the DOT set down new rules for which animals qualify as service companions for the purposes of mass transportation, and the answer is just dogs — dogs who must be tethered at all times in the airport and on the aircraft.

Diamond applauds the change recognizing that a service animal should be defined only as a dog trained specifically to work or perform tasks for a person with a disability and also how to behave properly in a setting like a crowded airplane.

K9s For Warriors is the nation’s largest provider of service dogs to veterans. The program carefully matches canines to handlers based on a number of factors, such as the type of mental, emotional or physical conditions of each veteran, including service-connected post-traumatic stress disorder, traumatic brain injury and/or military sexual trauma. “For someone with PTSD, getting up to 10,000 feet in the air can be a nightmare. This way [with a service dog], they can concentrate and just focus in on their animals,” Diamond said.

Wells received his service dog, Utah, a mixed-breed Rhodesian Ridgeback, five years ago and said there is no way he could fly or be in other situations in public without Utah by his side.

Wells, 44, who lives in Ponte Vedra Beach, served for eight years in the Army, including combat tours in Iraq and Afghanistan. Suffering from PTSD and a traumatic brain injury, Wells said the therapy and countless prescriptions he was on “made me feel like a zombie.”

With Utah by his side, Wells said he has been able to return to daily routines that used to serve as negative triggers for him with greater ease, and that Utah also helps with his mobility.

“They [service dogs] center you and force you to focus on what’s going on right in front of me,” Wells said.

Some advocates for people with disabilities say the new rules are too strict and do not take into account travelers with special needs.

In an interview Wednesday with The New York Times, Curt Decker, the executive director of the National Disability Rights Network, said: “There’s a large number of people with intellectual and emotional disabilities that benefit from having that kind of support on a trip.”

But in a statement the DOT released on its ruling, the department said it found “persuasive the information provided by airlines and other stakeholders indicating that emotional support animals, or animals being presented to the airline as emotional support animals, are responsible for a significant percentage of the incidents of animal misbehavior onboard aircraft.”

Diamond said K9s For Warriors put a lot of time and effort into lobbying the cause alongside organizations with similar missions, such as the American Service Dog Access Coalition.

“This is a rule change that we’ve long advocated for,” said Diamond.