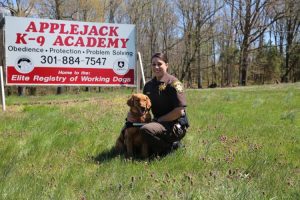 Sheriff Troy D. Berry announced the implementation of the initiative aimed at helping victims of crime in Charles County in a recent press release. The program has been in the planning phase for several months, according to the sheriff’s office, and is aimed at providing emotional support to victims of crime, particularly children. The Comfort K9, a golden retriever, will work directly with a detective assigned to the Special Victims Unit in the Criminal Investigations Division.