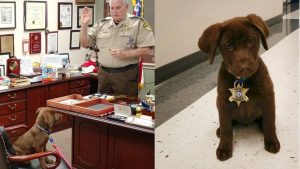 The new recruit, Deputy Lexi, received her official badge and will provide support to faculty at the sheriff’s office. She was donated by the Talki Foundation, a 501c3 not-for-profit organization that raises awareness and funding for service animals and their handlers, according to the CCSO.

First responders already deal with a great deal of emotional stress, especially during this uncertain time. Deputy Lexi will work to provide emotional support and companionship for officers and staff.

“Law enforcement is a high-pressure job. We are always looking for ways to support each other, and often just the simple act of petting a dog can contribute to the well-being of a person,” Sheriff Wilcher said.

“We are excited to have Deputy Lexi as part of our team. She will bring many smiles when they’re needed the most,” said Messer.

Operation New Hope is a Chatham County Detention Center inmate program that selects dogs from Chatham County Animal Services, Renegade Paws Rescue, and other dog rescue organizations to lower the recidivism rate at the jail. The inmates learn to train and care for dogs during a 4-week cycle. Once the dogs graduate, an adoption event is held to place the dogs into their forever homes.