Should ESA be able to fly? 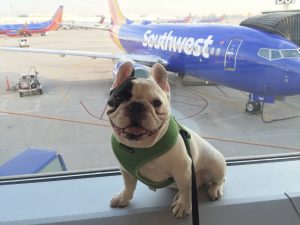 You might inwardly groan when you board your airplane and realize you’re next to a screaming child, or find yourself squirming when the person next to you takes their shoes and socks off for the duration of the flight.

But how would you feel if you ended up sat next to a 70 pound, pot bellied pig?

Meet Hamlet the hog, owned by 31-year-old American Megan Peabody, who’s based in the US Virgin Islands.

Yes, pigs can fly — because Hamlet’s classified as an emotional support animal, Peabody can bring him into the cabin — at least in the United States — free of charge, to aid her in-air anxieties.

“His presence is calming because it is familiar to me,” Peabody tells CNN Travel. “It distracts me from my surroundings when they make me anxious.”

Emotional support animals (ESAs) are an increasingly hot topic in the United States, as more and more passengers arrive at the airport with an animal in tow, arguing that a furry friend will alleviate their aviation anxieties.

The phenomenon’s prompted vigorous discussion on what constitutes an ESA, whether the system’s being manipulated by pet owners keen to skip travel fees, what the impact is on air crew and fellow passengers, and whether ESAs on the plane do a disservice to those who genuinely need service animals on board.

It’s not just allergy-stricken travelers and exhausted flight crew who are growing frustrated at ESAs on airplanes — passengers who need to travel with service animals are also feeling vexed by ESAs in the air.

In August 2019, over 80 veterans and disability groups wrote to US Secretary of Transportation Elaine Chao, requesting that legislation be brought in to require adequate training for ESAs on airplanes.

One of the signatures on the letter is that of Lori Stevens, founder and executive director of Patriot PAWS Service Dogs, a group that provides trained service dogs for disabled veterans.

Stevens clarifies that she believes some travelers have a true need for an ESA, but there needs to be stricter regulations.

“[My] dogs go through through years of training — months and months of training — and your emotional support animal doesn’t have to necessarily have any training. I think there needs to be some minimum requirements set up.”

Her comments are echoed by Jason Haag, CEO and founder of Leashes of Valor, a US-based non-profit that connects veterans with PTSD or a traumatic brain injury with a service dog. Haag also signed the letter to Chao.

“Emotional support animals are fantastic,” says Haag. “I think dogs and cats and any type of animal can do a whole bunch of things emotionally and psychologically for a person.”

The problem, he says, is when untrained ESAs are let loose in public spaces like airplanes.

“It can do a real disservice to other dogs that are in the area that have been specifically trained such as ours,” Haag says.

Travelers with service animals have also expressed frustration at the general misconception of what constitutes a service animal, and what defines an emotional support animal.

In summer 2019, a service horse named Flirty made headlines when he boarded an American Airlines flight from Chicago to Nebraska.

Some media outlets referred to Flirty as an ESA, but the miniature horse is actually a trained service animal. Her owner, Abrea Hensley, suffers from PTSD, depression and anxiety. On Flirty’s popular Instagram page, Hensley explains the horse is trained to alert her when she’s on the verge of a panic attack or a dissociative episode.

It would be incredible if there were certain flights, or even an airline, designated for people traveling with animals.

“It just seems there is a way around all the chaos that seems to be the norm now for ESAs. It’s a lucrative idea for someone willing to give it a try, in my opinion.”