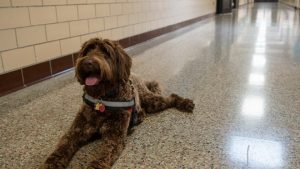 Roger Bacon senior Grace Wilking found the end of last school year to be tough when her softball season halted as a result of the COVID-19 pandemic. The uncertainty surrounding her senior volleyball season heightened that anxiety.

To curb the stress, she found herself making frequent stops in the counselor’s office to see Roger Bacon High School’s secret weapon against sadness and despair – Sisi, the Australian Labradoodle therapy dog.

Wilking, who also manages the girls basketball team, believes Roger Bacon enhanced the student experience by immersing Sisi into the student population. “Bacon has always been a family environment,” Wilking said. “Everyone knows everyone’s name. You don’t really see an unfamiliar face but when Sisi came, it was like a new thing that not really any other high schools did, not that I know of. [Sisi was] brought into the school and everyone was able to interact with it like no one was left out of it.”

Wilking is a member “RB 180.” A student-led spiritual life ministry team where athletes can cope with the stress of their respective seasons and school by “putting it in the hands of God.”

During those months of anticipation, Wilking had her moments like everyone else but decided to remain faithful for herself and her teammates.

“I tried to keep a positive mindset about everything when my teammates would text me like, ‘Do you know what we’re gonna do for the rest of the season?’ And I would just be like, ‘We’re just gonna play it by ear. Have the mindset that we can walk in that gym one day for practice and start a new season.’”

Since Sisi joined the Spartans in April 2019, Roger Bacon has become even more of a safe space for all students.

Guidance counselor Pam Rosfeld along with Roger Bacon administration started doing research back in 2018 on how dogs can make a positive impact on students facing hard times at school.

“Last year we had some regulars that would just come in and want to spend some time with her like during lunchtime,” Rosfeld said. “She’s great at de-escalating stress, or anger or anxiety. You can see the kids sit on the floor and kind of play with her, pet her and I think everyone’s blood pressure just goes down when that happens.”

In between classes she can be found walking the halls with a staff member. During class periods, she sits in the guidance counselor’s office awaiting someone she can comfort or she visits classrooms to help ease test stress. Sisi even makes her way to sporting events, deepening her connections to the athletes.

Although there is no data-driven evidence on Roger Bacon alone since the addition of Sisi, Rosefeld has noticed a difference in the school. Rosefeld hopes Sisi can set an example for other schools and they too follow suit.