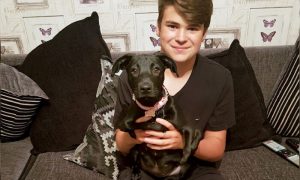 A six-legged dog and a bullied teen have become the best of friends as they battle life’s adversities together.

Luke, a student, has been bullied because of a condition called psoriasis, which makes skin itchy and flaky. The teen, from Orpington, in England, instantly fell in love with the special pup born with two extra front legs—they have become inseparable.

The Labrador-cross, named Roo, short for Kangaroo due to her unusual hopping gait, can only get around on her back legs. Her extra set of front legs made normal walking impossible.

Talking to The Epoch Times, Luke’s mom, Lauren Salmon, said that Roo has turned 1 year old, and since coming to their home, Roo has had an “operation to remove one extra limb that would have caused problems.”

“I’m looking into training Roo as a therapy dog as more people can relate if they have a disability to an animal with special needs,” Lauren said.

Lauren bought Roo from breeders in Essex after her teen son saw the special pup on the internet, noted SWNS, according to media reports. Lauren had contacted celebrity veterinarian Dr. Noel Fitzpatrick in 2019, hoping he may be able to help improve Roo’s mobility. Dr. Fitzpatrick stars in a UK-based TV show called “The Supervet.”

“She’s full of puppy energy, so we’d describe her as placid but playful. There are not many dogs like Roo out there,” Lauren said. “I think the breeders kill them off because they’re not worth anything, but to us, she’s priceless.” When Lauren and Luke went to collect Roo from the dog breeder in Essex, England, the little pup rushed out of the pen and jumped up at them on her back legs.

“It was love at first sight for Luke and Roo from then on,” Lauren told SWNS. “Luke is like a protective father. They never leave each other’s sides, and she even sleeps in his bed.”

For Luke, Roo is very much a soulmate. “Luke feels like the odd one out because of his condition, and now he’s got a best friend to match,” the teen’s mom said. “I think Roo will reduce Luke’s stress, and that should help his skin.”