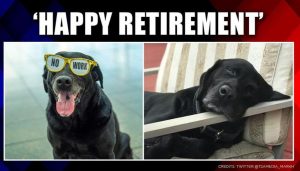 A “cool” bomb-sniffing dog for Transportation Security Administration (TSA) who spent at least 8 years in his career has now retired. The pooch graduated in the third class of passenger screening canines trained at Lackland Air Force Base in San Antonio, Texas. In a video shared by TSA on Instagram and regional spokesperson Mark Howell of the brave canine TTirado, his handler Keith Gray can be seen celebrating his accomplishments at a private ceremony at IND on the last day of his job that has won the pooch praises all over the internet.

“TTirado is ready for retirement and thinking of investing in tennis balls. They have a high return rate,” TSA wrote in a post on Instagram while sharing the TTirado’s last detection on the job that stunned the social media. Footage shows the moment pooch indicates his last luggage set up, dozens of coloured tennis balls fall from above. Named in honour of New York Engine 23 Firefighter Hector Luis Tirado, who died in service on 9/11, the nearly ten-and-a-half-year-old dog is one of the few last dogs on the TSA-bred puppy program who joined in 2012. While celebrating his last day with vibrance and joy, handler Gray said, “I am thankful for such a fantastic partner in TTirado as my first dog. He has taught me a lot over the years, and I have been amazed in his growth and how far we have come.”