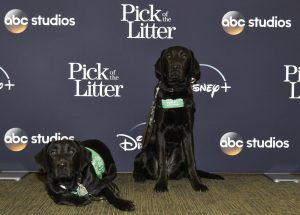 What are Southeastern Guide Dogs most popular dog names?

Most guide dog organizations allow the honor of naming privileges to be bestowed upon the puppies going through training by people who donated a lot of money, so it isn’t exactly like there’s a set of rules to follow like with hurricanes, as it’s more up to the donor. So a lot of the time, names can overlap, or come from goodness knows where. The impawtant thing is that that’s the dog’s name, and so it isn’t really like a normal adoption where the new owner could change it if they wanted.

The Southeastern Guide Dogs blog recently recapped the top 10 most requested puppy names, while also noting that every letter of the alphabet has been used at some point (X has the least, with 14 dogs beginning with that letter).

The first Southeastern Guide Dogs canine was a black Labrador Retriever named Freedom, and the longest name that has been given was the regal-sounding Sir Maverick of Monaco.Southeastern Guide Dogs is located in in Palmetto, Florida, about 45 minutes south of the Tampa Bay area, and the school was founded in 1982. Their first graduation was held in February 1984, and since that time they’ve graduated more than 3,200 teams.