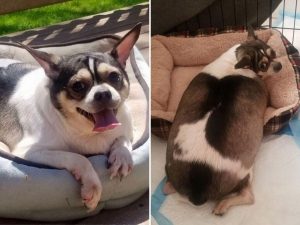 An 8-year-old chihuahua, who’s since been named Stanley, was rescued after being locked inside a crate and left on the side of Route 80 in New Jersey.

The dog spent a week at Ramapo-Bergen Animal Refuge in Oakland, New Jersey, and now has a foster mom who is helping him lose weight so he can improve his mobility.

When Stanley was was originally found, he was “frozen in fear,” said Megan Brinster, the refuge’s executive director.

Community members are chipping in to buy the dog a wheelchair and physical therapy services.

At the end of April, an overweight chihuahua was rescued after being found locked inside of a small crate on the the side of New Jersey highway Route 80.

When the dog was originally found, he was “frozen in fear” inside of the cramped box, Megan Brinster, the executive director of Ramapo-Bergen Animal Refuge in Oakland, New Jersey, told Insider. After spending a week at an animal control facility, the 8-year-old chihuahua – who has since been named Stanley – found a safe haven at the refuge, Brinster said.

Brinster explained that the dog weighs 21 pounds, which is about twice what he should weigh at a healthy size, which makes it difficult for his short legs to help him move on his own.

Now, the dog is being fostered by an owner who has experience caring for dogs with disabilities and medical complications, which Brinster said is a “game-changer.”

“He is challenged mobility-wise, and he needs someone who can help him get around,” Brinster said. “He also needs to be on a carefully monitored diet.”

Brinster added that Stanley’s new caretaker is “the most kind, loving foster mom.”

“We know that [Stanley] is just being showered with so much love and affection,” Brinster said.

The New Jersey animal refuge is used to taking in pets who have medical or mobility challenges or who need to gain or lose a substantial amount of weight, Brinster said – but she said Stanley’s case was especially moving. Supporters of the refuge have been rallying around the dog and his traumatic story, from asking the organization how to help and chipping in to buy Stanley a wheelchair and physical therapy services.

“Stanley’s story is really about the power of transformation,” Brinster said. “It comes from love and care and believing we can make a difference.”