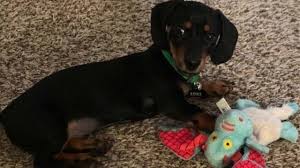 Police are looking for two teens who might have been involved.Meredith) — A couple in Denver is asking for the public’s help to find their dog after they say he was stolen at gunpoint.

Loki was the perfect addition for Shawn Rozinski and his girlfriend.

“He’s high energy, he’s very lovable, like he just loves to cuddle and play,” Rozinski said. “He has really big floppy ears like he will trip over them.”

Rozinski said they named him Loki for his mischievous personality.

The nearly 3-month-old Dachshund puppy held a key to the couple’s hearts from the moment they picked him up two months ago.

“Loved him ever since,” Rozinski said.

He said he was walking Loki with his girlfriend near a playground around 7 p.m. on Thursday when a group of teens asked if they could take photos with the dog. Rozinski said ‘yes,’ and one of the teens pulled out a gun before taking off with his dog.

“I was like is this real?,” he said. “And when I looked down the barrel I could see the bullet.”

The threat didn’t stop Rozinski from fighting for his dog, however.

“I started to try to get into the car, like try to open the car or open the car door, reach in and grab him,” he said. “The kid just kept smacking, like swinging the gun and was like ‘don’t.’”

Rozinski had plans to train Loki as an emotional support dog. Now, he is just trying to keep himself together.

“He was a big part of the family even though he was around for two months,” he said.

Denver police have identified two male teens, but no arrests have been made.

In the meantime, Rozinski has put out ads on Instagram and Facebook and has even reached out to the community for any security camera footage.

CrimeStoppers is offering a 2,000 dollar reward to bring Loki home. Any tips made can remain anonymous.

“Just return him back to us unharmed,” Rozinski said.