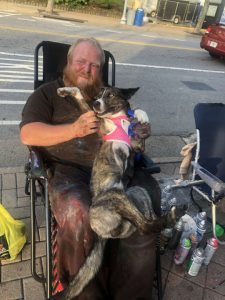 A week ago, things were looking pretty grim for Bobby Linville. His van with his 8-month-old husky mix service dog inside had been stolen from a parking lot at the Oceanfront early in the morning Friday, June 12.

His dog, Baby Girl Blue, was nowhere to be found.

Our sister-station WAVY-TV met up with Linville Wednesday, June 17, so he could tell his story and make a public plea for help finding his service dog, which provides him with emotional and physical support.

“I don’t care about my van. My boss owns a car lot, I can get another vehicle. A vehicle is a dime a dozen, but my dog, you can’t replace that. My dog was my right-hand man or woman, you know what I’m saying? Like, my best friend, my everything, I’m trying not to cry as we speak,” he said as he spoke with WAVY’s Tamara Scott on Wednesday.

However, the story has a happy ending. On Friday, June 19, after a long week apart, the pair was reunited.

A Norfolk spokeswoman said Wednesday that a local shelter had custody of the dog.

Linville and Baby Girl Blue met back up in Virginia Beach just after 7 p.m. Friday.