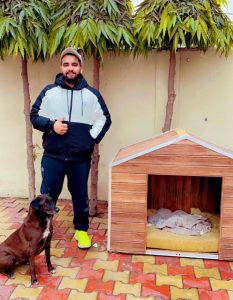 Manan Arora (28), a resident of 66 Feet Road, is winning hearts over the internet for his benevolent gesture for stray dogs. While he specialises in interior decoration, he has utilised his skills to make small shelter homes for stray dogs.

With the help of his workers, he has made nearly 300 kennels in just one month. He also appeals to residents to take these ‘little huts’ for free for stray dogs in their areas. Several people have appreciated Manan’s efforts on social media and he received over 1,000 orders within hours of posting about the same on Facebook. Owner of Sai interiors, Manan said: “The idea to build dog houses occurred to me after my pet dog Russell died in March this year. I am very fond of pet animals and seeing stray dogs struggling to survive during the winter months makes me extremely sad. Therefore, a zeal to do something for these innocent creatures, who cannot even express their miseries to us, drove me to construct these dog houses.” The months of November and December are the only two months for Manan, when he remains unoccupied from his business. Accordingly, he planned to utilise these two months in making ‘shelter homes’ for dogs. Himself a dog lover, Manan said, he had first created a kennel around three years ago, which he had kept outside his house. To make these durable, he has given them wooden and iron finishing. He says for the comfort of dogs, he also spreads dry grass inside that keeps them warm. Impressed by Arora’s kind initiative, several people applauded Arora’s gesture on social media through comments. A user wrote ‘respect’, while another wrote ‘So grateful to have people like you who actually go out to help the voiceless animals’. ‘Super proud of you, respect for you’, expressed another user. Manan said he received tremendous response and several calls after he wrote about the dog houses on social media. Such was the response that he had to ultimately switch off his phone at night. A dog lover from New Zealand even offered to sponsor his initiative for constructing more dog houses.