Stress During COVID-19 Can Affect Your Dog or Cat 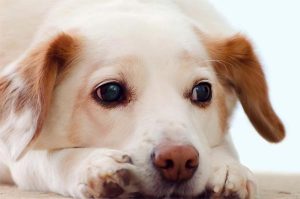 Lots of Californians are feeling cooped up and stressed out due to COVID-19. But there’s another member of the household whose mental state might be changing: our pets.

Experts say dogs and cats have stress thresholds, just like humans. And when there are too many changes — such as an owner working from home, the local dog park being closed or children not going to school — they can lose their coping mechanisms.

Plus, our anxiety can trickle down to them.

“They’re not sitting there wondering if we are gonna succumb to a horrible virus, but certainly our concerns become their concerns,” said Liz Stelow, a veterinary behaviorist at UC Davis.

While our emotions are contagious, our germs probably aren’t. There’s minimal evidence for human to animal spread of coronavirus, though two dogs, one cat and one tiger have been infected. Veterinarians say there is a small risk of dogs or cats spreading the virus between humans who touch them, but research shows it lasts much longer on hard, smooth surfaces like plastic than on fur.

Some obedience trainers say they’ve gotten an uptick in calls recently from owners whose dogs are acting strangely.

“There’s something new, there’s something that changed … and they start barking, chewing, digging, biting, fighting,” said James Summey, owner of JTS Dog Training in Sacramento. “It might have gone under the radar for a while, but that one little stressor just kind of pushes them over the edge, and it really shows [owners] what their dog’s true colors are.”

Summey says going back to basic obedience training reminds your dog that you’re in charge, which can help them feel safe.

“Repetition, patience, consistency … that’s what I encourage for all of my clients,” he said.

Many dog trainers have canceled home visits due to COVID-19 risk, but are offering courses remotely.

Kayla Corey, a trainer with a Northern California obedience company called Bark Busters, said one of the best things you can do for a dog or cat is to maintain their typical routines.

“If you normally take them on a morning walk or a nightly walk, continue to do that,” she said. “And if they are normally kenneled during the day while you’re at work, you need to still kennel them and separate yourself, maybe work in a home office or separate room.

“The consistency is really important,” Corey said.”The more time you have with your dog it’s essentially more time for them to train you.”

But Stelow, of UC Davis, points out that training is not an end-all-be-all solution. She says dogs that are exhibiting anxious or aggressive behavior, either toward their owners or toward other dogs, might have something more complicated going on.

Veterinary behaviorists can write those prescriptions, but Stelow says many are not seeing new patients due to COVID-19. She suggests concerned pet owners call their veterinarians to ask about behavioral treatment.

Even without professional help, there are steps owners can take to maintain a state of normalcy for dogs and cats under the current orders. For one, Stelow says owners should keep an eye on how their own emotional state affects their pets.

“If I had a dog that was particularly worried when I melted down, I might try to find another place in the house to do that, so he didn’t have to take part in it,” she said.

Finding ways to give your pet alone time, or even giving them some distance when they growl or hiss rather than reprimanding them, can help them stay calm, she said.

“When you’re trapped at home with your dog who’s growling at you and you ask him to stop, he may end up escalating,” she said. “Take it as a warning that they’d like you to step away, and actually do that.”