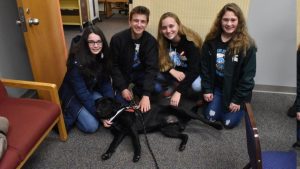 Essexville-Hampton Public Schools’ robotics program has reached the final stage of a national grant competition that could win it $25,000 toward a goal of bringing full-time therapy dogs to each building in the Bay County district.

The State Farm Neighborhood Assist program has 200 finalist competing  for 40 $25,000 service grants, and public voting for the competition began Wednesday, Sept. 23. As of 4 p.m. Wednesday, the district was 15th out of 200 on the leaderboard and has a good shot at securing a grant, said Ethan Shannon, robotics teacher and team mentor for “The E-Ville Empire” at Essexville-Hampton’s Garber High School.

As of Thursday morning, Sept. 24, the team has fallen to 21st, but is still solidly within the margins of winning a grant.

People can sign up on State Farm’s website to cast up to 10 votes a day for their favorite proposal. Voting ends on Friday, Oct. 2, and State Farm will announce the winners on Wednesday, Nov. 4.

FIRST robotics teams foster a culture of community service, Shannon said, which led a group of his high schoolers to look a team project to help their fellow students.

The students found that therapy dogs could help improve the mental health of the community, which has become more relevant as anxiety-related issues spike during the novel coronavirus pandemic, Shannon said. Kids having access to a therapy dog can help improve self esteem, reduce anxiety and calm students in crisis, he said.

“To be able to de-stress with one of those animals is like nothing else we have for any of those kids right now,” Shannon said. “It’s something that can really, really make a positive impact on the school.”

Over the past year, the program raised nearly $5,000 to bring its first dog, a Shetland sheepdog named Chip, to Verellen Elementary School. Chip is ready to start his job as soon as in-person classes resume, Shannon said.

“After this COVID thing… There’s gonna be a lot of anxious kids out there, especially the little ones,” Shannon said. “We’re excited (Chip’s) gonna be part of it too.”

Winning the grant would likely provide enough funding to finish the students’ goal of getting three more dogs for the community, Shannon said. The dogs would have classroom presence at the high school, middle school and two elementary buildings, and would also be used in outreach programs at the local Boys & Girls Club, hospitals, nursing homes and group homes, he said.

The students thought it would take much longer to raise the money to buy Chip alone, Shannon said. Winning the grant and reaching their goal would be the fulfillment of a dream for them, he said.

“Our kids are absolutely determined this is going to be a reality before they graduate,” Shannon said. “To think that we could complete that journey in just another 10 days time, it’s going to be really surreal for them if we can make that happen.”
The robotics program included about 25 high school students, 25 middle school students and nearly 30 elementary students last year, and all students play their part in working toward the service goals, Shannon said. Other FIRST teams in the region are helping to support and promote the proposal, and Shannon hopes the small town’s big heart will help it to victory.
“We anticipate competing against organizations that are much larger than our family of 25 members but know the FIRST community could make the difference we need to be successful in the voting phase of the grant,” Shannon said. “Our community really came out and supported us today. We have a real chance.”