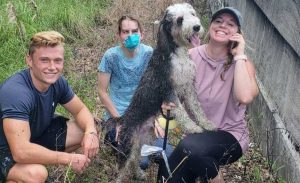 A Tampa family’s therapy dog that was missing all weekend and into Monday has finally been reunited with his owners, and it took a village to do so.

The search for Sully captivated the attention of an entire community. All eyes were glued to Laura Holland’s Facebook page all weekend for updates on her son’s missing therapy dog. Laura’s son Liam is a brain cancer survivor.

Laura initially posted about Sully’s disappearance Saturday at 9:52 a.m. She said the dog was accidentally let out by staff at Pet Paradise, a boarding service.

At 12:47 on Saturday, Laura took to Facebook again recruiting anyone who can “confidently help comb” a 2-mile radius in a wooded area in Wesley Chapel.

“If you have tall boots and aren’t afraid of critters, please meet my husband right behind BB&T Bank off Route 56.”

Laura was told Sully escaped Pet Paradise while still attached to his leash and was thinking her dog got stuck on something in the woods and was “desperately trying to survive in this heat.”

At 2 p.m. Laura asked her Facebook friends if anyone knew a police officer who may have a K-9 that could assist in the search.

About two hours later, Laura and her family began placing flyers up around the community.

Later that afternoon, Pet Paradise announced a $500 reward for Sully’s return. Laura considered reaching out to the media.

By 10 p.m. Saturday night and after over 12 hours of searching, Sully was still missing. Laura’s husband left the house to check a spot where they left their clothes and some food and water earlier that evening. No Sully.

The cash reward for Sully was now over $1,000, Laura estimaged, as the community was offering to chip in on top of Pet Paradise’s $500 reward.

Sunday morning around 9:20 a.m. Laura said they received a possible Sully spotting at a Walgreens in the Westchase area. It was a false alarm.

By Sunday evening, Sully was still missing. The entire day, starting at 6 a.m., was spent looking for him with food stations, professional traps, and prayers. Thermal cameras were planned for after sunset.

Monday at 2:57 p.m.: “WE GOT SULLY!! This absolute hero (John) in the navy shirt ran his little heart down the ramp off 75 and rescued our boy.”

Laura said a tip came in around 1:15 p.m. that Sully was in a Haverty’s parking lot — about two miles from the family’s home near State Road 56 and Interstate 75. As Sully was being surrounded, Laura said he took off and ended up on the interstate.

“At one point everyone stopped running and I thought he was gone again but then I saw John carrying our boy in his arms and walking back towards me – straight out of a movie.”

Laura said Sully is “Safe. Filthy, but safe.” The dog was taken to the veterinarian for a few hours for hydration and grooming. Over $5,000 has been raised for the “heroes” that helped bring Sully home.