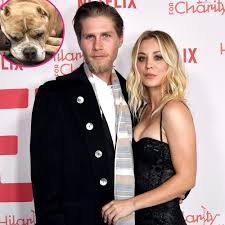 Kaley Cuoco and her husband Karl Cook are mourning the loss of their rescue pit bull breed, Petunia. In the couple’s respective posts on their social media accounts shared Wednesday, they announced that their beloved dog had died. Cuoco and Cook had adopted the senior pup earlier this fall from the California organization, Paws for Life K9 Rescue, an organization that rescues dogs from shelters and trains some as therapy dogs.

“After a life of untold loneliness and hardship, she is at rest. For that, I am happy,” Cook captioned the poignant slideshow of photos dedicated to Petunia, embedded with several emojis, ranging from hearts to crying faces. “We did what we [could], adopted Petunia to do better than anyone else, give her everything. She is resting at peace, with every day’s sunset to warm her. That is what matters most. Petunia, it is not the amount of time together, but its [effects] on the soul. You affected everyone who met you. You’re forever, my old lady. I miss you so much already, sleep, my sweet angel.”

Cuoco, currently starring in HBO The Flight Attendant this month, also paid tribute to her dog via her Instagram Stories, sharing a shoutout to the nonprofit that initially rescued Petunia and where they adopted her from. “We were so honored to love her in her final days,” she wrote on top of an image of herself and Cook with the pit bull. “We love you dear special Petunia. You are the reason we continue to save dogs just like you. And we will never stop.”

The nonprofit organization also paid tribute to Cuoco and Cook’s Dog, sharing a post of their own alongside tender videos and photos of “Princess Petunia” with the couple. “Sweet Dreams Princess Petunia [broken heart emoji] condolences to [Karl Cook] and [Kaley Cuoco] for their loss. It is what we hope for every dog we take in, a life adored and cherished, no matter how much time they have.” The dog’s death comes just eight months after Cuoco announced she and her husband’s rescue dwarf pony, Fiona had died following health complications the animal experienced throughout their lifetime. Cuoco at the time commented on how Fiona’s “small body could not survive,” but was no longer living in pain and was “surrounded with love” thanks to the couple’s large family of animals, which include horses, dogs, bunnies and more. “We will continue to save everything we can but know days like this will happen,” she wrote. The couple’s shared love for animals is what brought the two together, ultimately developing a strong connection that Cuoco tells PEOPLE was one that was “meant to be” from the start. “We share so much love for animals — we love horses and we love the sport,” she said of her equestrian husband. “I think anyone who works with animals has to have a kind soul. It’s almost like he’s the horse whisperer. He is just wonderful with them. It’s really beautiful to see the patience he has with them. He’s so gentle.”