Tessa’s The Pet Of The Week 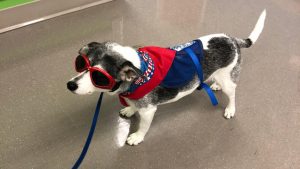 Every Monday we search through all of the photos submitted by our viewers using Chime In just to find that one special pet to feature as our Pet of the Week.

This week we chose Tessa, a 13-year-old Rat Terrier Mix who is also a certified therapy dog sent in by Beverly Oakes. Beverly says that she must be must be mixed with something really calm, because she doesn’t have any of that “Rat Terrier jitteriness.” Beverly adopted Tessa from outside of a PetsMart back in 2007. “It was 28 degrees outside and they were having an adoption even out in front of the PetsMart. I was not in any way planning to get a dog, but there was a large pen there with several large breed puppies and this other little one that was curled up on a bath rug, shivering for all she was worth with her nose tucked into her belly,” said Beverly. “I picked her up and stuck her inside my jacket and our hearts connected. I realized almost immediately she was not a puppy. I asked the lady there and was told she was about a year old and had been schedule for euthanasia that day, so they were trying to get her adopted. Of course I had already made up my mind she was mine.”

When she brought her home, she asked her what she should name her and started listing off some names. When Beverly said Contessa, the little dog raised herself up and did a little spin, so really, she chose her own name. It got shortened to Tessa because it was easier to say.

Tessa eats healthy, getting fed Science Diet but also loves her treats and chews. She loves any toy that squeaks. The squeakier, the better! And she loves to play fetch, but she selects which toy she wants to go after. Beverly has taught her to sit pretty, roll over, dance, crawl, wave and rest her head on a person. She said Tessa also knows “shh, go to sleep,” which was substituted for “bang, you’re dead” because that isn’t very appropriate when visiting hospitals and schools. Tessa is no stranger to the television spotlight, we shared her story back in 2011 showcasing her visiting hospitals and bringing joy to the patients. Like most beloved dogs, Tessa gets to sleep in her human’s bed. Beverly said,” She is the one dog that gets to because she is so good – never wakes us and never gets out of bed until we are ready to get up.” Tessa is also a great protector of cats, loving to cuddle up with them when given the chance.

Beverly said that Tessa has great energy, but is ultra calm when she goes visiting, almost like she can sense who needs a visit from her.

“Her cuteness shines in her willingness to wear these pink sunglasses I put on her for special events like Fiesta, Halloween parades, etc. Also, when she rests her head on a patient’s leg or arm, it melts hearts,” said Beverly. Tessa became a Registered Therapy Dog in 2008 with Therapy Animals of San Antonio and has been one since. She is tested every two years and always passes with flying colors. Therapy dogs are known to lower blood pressure, help to release endorphins that help calm people, diminish pain, lessen depression, encourage communication, increase socialization, reduce loneliness and much more.