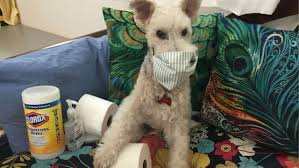 Finley is a therapy dog at North Central Baptist Hospital in San Antonio that normally spends his time cheering up patients, but since he hasn’t been able to visit patient’s hospital volunteer and Finley’s owner, Debbie Sinks says he’s been feeling down.

Sinks says the hospital suspended all activities by therapy dogs and their volunteers about a month and a half ago.

“We know he gets sad because he just lays around, he sighs and he doesn’t eat as well,” said Sinks.

But, this isn’t the first time this friendly pup has felt depressed. Five years ago, Finley was hit by a car and was out of work for months.

“We knew what to look for,” said Sinks. “We have been trying to find activities for him.”

Since the two haven’t been able to visit the hospital, Sinks says she’s been taking him on more walks and the two go exploring in the woods.

“We take him on car rides just down the road and back,” said Sinks. “He goes swimming when we can and stuff like that, hanging out at home.”

But Sinks and Finley are waiting for the day they can return to their work at the hospital.

“Volunteering is very important to our life, and it’s kind of our work now that we are not working,” said Sinks. “This is not what I expected retirement to be like.”