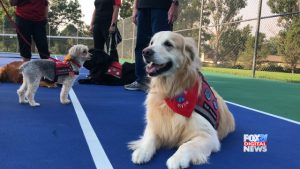 For the first time ever, a team is being awarded the American Kennel Club Paw of Courage Award.

The Go Team Therapy Crisis and Airport Dogs initially started as a team of two dogs back in 2012, during the Waldo Canyon Fire.

“One of the firefighters asked me what the name of our team was, had to think of a name real quick. So, I came up with the Go Team,” Trepagnier said.

Since then, the nonprofit has grown to more than 600 teams across the U.S., Italy and South Korea.

“We’re not your typical therapy dog team. Most of the therapy dog teams go through like about a 20-minute course, or a testing. With the Go Team, it’s two days, it’s over 20 hours, and you actually have to be referred to our team,” Trepagnier said.

With dogs of all different breeds and sizes, you’re sure to find the perfect one to help ease your nerves.

“Most people, they pet a dog, they’re going to smile. It really helps relax them, a good stress reliever, unconditional love,” said Lori Schlonski, Director of Administration and Regional Coordinator for the nonprofit.

Typically, teams volunteer at schools, assisted living facilities, military bases, and more, but the coronavirus pandemic has made the group change course.

“We haven’t been able to volunteer and I’ve been in touch with several of the nurses where we normally go to the hospital and they said this is when they need the dogs more than ever, because they’re understaffed, they’re overworked, and they’re not having the dogs there. And that’s all they’re talking about every day, is they need the dogs back,”

“They bring down stress in them, they make them happy, blood pressure comes down. You know, all you gotta do is pet them,” said Kim Musgrove, a volunteer team member.

At nearly 14 years old, Tabor, who helped launch the nonprofit, is looking forward to spreading joy in person again.

“Usually, he rides around in a wagon, which is really great when do special education classes because you’ll have the kids in the wheelchairs and they’ll see him in a wagon. And it makes them feel like, ‘here’s a dog that’s just like me,’” Trepagnier said.

“It’s all different for people. Some need it because they’re sad, some need it just because it just makes them feel joy. It’s just a good thing,” Schlonski said.