The Love Of Animals 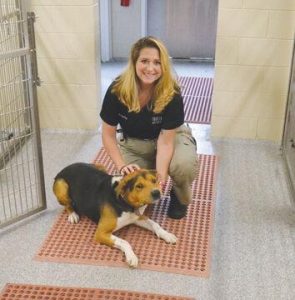 Madison Whitby heads from her Jarratt home to the Emporia Animal Shelter every weekday to assist with the cats and dogs housed at the site. The 2018 Greensville County High School graduate is also a Psychology major at Virginia Commonwealth University.

Finding the right balance between a job and the classroom is difficult for many people. Whitby found the balance to excel in both.

“I stay pretty active and keep a busy schedule.” she said. “I usually do school at night, or on my lunch break here I will work on school. I try and multi-task the best I can. I’m actually doing better in school than I did while I was at home. I have more structure.”

Whitby began working at the Emporia Animal Shelter on Oct. 13. On a typical day, she gets to work in the morning and cleans the kennels from the night before. Whitby follows by playing with the dogs and cats. After feeding the animals, she does paperwork for the Emporia Police Department. Whitby continually checks to make sure the animals have plenty of food and water. If the weather cooperates, she’ll take the dogs out for a walk.

It’s a perfect gig for the self-described animal lover that has five of her own at home. The job has many moments that bring joy to Whitby.

“The most rewarding part of the job is seeing dogs and cats that have come in from bad homes and seeing their attitudes change,” she said. “They come in scared and nervous, and eventually they become happy and loving. It’s especially rewarding to see them get adopted and I know they are going to a good place knowing where they came from.”

Whitby and the Emporia Animal Shelter staff’s goal is finding a home for the animals that come to the shelter. If they are not adopted, the next step is to find rescues to send them. Whitby said it reached a broader audience and gives the animals a better shot at getting adopted.

Whitby is a Psychology major. She’s looking at a career in occupational therapy and specialized therapy. Whitby said she hopes to use therapy dogs in her line of practice.

“I’ve seen it first-hand and it is proven to be beneficial,” she said.

For now, it’s Whitby that is proving to be beneficial at the Emporia Animal Shelter.