The Way Of The Dog Episode 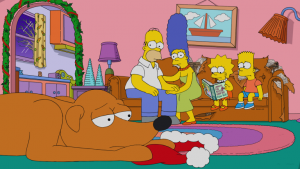 The Simpsons end season 31 with one of those Christmas presents people give their pets. This is fair because they carved out a horror episode for Thanksgiving this year. “The Way of the Dog,” is cute as a puppy dog’s ears and it is no turkey.

“The Way of the Dog” begins without opening credits or a couch gag. It jumps right in with Santa’s Little Helper’s POV. We’ve seen through the family dog’s eyes before, and it is both refreshing and foreboding. It usually means he’s sick or running away or, in one episode while in the care of Mr. Burns, being released along with the other hounds on Bart. In this case we begin in his dream, which will become very important because the episode hangs on Santa’s Little Helper getting Dognitive Behavioral Therapy, and the first part of owner-training is dogs see with more than their eyes. They can “smell ya later,” as Nelson might say. The dream actually focuses on another simple creature. Ralph Wiggum, who we first see happily chasing butterflies, and next see fearfully running from them. Santa’s Little Helper and Ralph aren’t very different. They both have very simple views of the world, and even more simplistic ways of interpreting it. The Simpsons put a spin on the Far Side “blah blah Ginger” joke. The words “Santa’s Little Helper” never actually come out of any of the Simpsons mouths while they corner him and try to get him to obey. But Grandpa, whose own complaints have been labeled gibberish along with everyone else’s, remains gibberish when the episode changes to people talk. In the meantime, the problem has been mimed as a problem Santa’s Little Helper has with a Santa hat.

In the meantime, the underlying premise is mostly plainly foreshadowed when Marge declares “dogs love dressing in people clothes.” There is a failure to communicate. Marge also gets to exhibit one of her master-of-the-obvious jokes when she complains about wasting digital photographs, which are actually, virtually, endless. Homer gets to do his improv version of “Jingle Bell Rock,” which is far more entertaining than the original lyrics. He tries to impress a Pay-Per-View operator by ordering a fight in HDTV like a big shot. He also snorts Candy Crush debris, but only because he’s already brushed his teeth.

Mr. Burns doesn’t have much screen time but his oppressive influence over Homer is in extreme view during the episode. In an early scene, we see his card on the back of the Christmas tree advising his employees to think of work during the holiday. Towards the end of the episode, Bart hires Homer’s boss to be Homer’s boss so he can do what Bart wants him to do. If only Bart would use this power for evil instead of good. Burns actually advises, well, commands Homer to do the right thing and let Bart sleep outside with the dog. It’s sweet, in a suitably twisted way.

It looks like we may have heard the last of Bart’s evergreen catchphrase “Eat my shorts.” Now that he’s gotten a taste of his own medicine he realizes the bite has gotten a little stale. The episode reexamines its past throughout the episode, so this is a compound fracture in the fairy tale. The Simpsons have veered toward a more middle of the road kind of subterfuge in recent seasons. While they know they can’t change whatever sins they may think they committed, they can make revisionist history going forward. It’s not that the Simpson family doesn’t apologize. They have and often. But upon closer inspection, they’ve always been the family which gets things right.

So when the family dog goes wrong, they call in a dog psychologist, the aptly named Elaine Wolff, played by the talented Cate Blanchett. Elaine loves dogs and despises all pet owners as privileged and entitled, something you can’t say about the Simpson family. Elaine is going through problems of her own, mainly because The Simpsons missed hearing the dulcet tones of Michael York pronouncing “exhume.” Ultimately Elaine cannot resist a wagging tail. However, Lisa’s attempt to bully the canine therapist is unexpected and largely effective. “Hold my pearls,” she tells Bart as she puts up her dukes. “There’s only so much poop I can scoop,” says Elaine. Lisa loses the round by forfeit but the dog has his day.

The episode itself is quite wholesome. Even the darkest character, the abusive race dog trainer, has a kind of redemption in the mere fact that Santa’s Little Helper mother is still alive. The threat of being put to sleep comes up on several occasions, however. We don’t quite believe it when the cheapest veterinarian in town brings up having to put down any dog who bites someone. Homer can’t bear to look at the man who wants to put Santa’s Little Helper to sleep, and wears a dog cone on his head on the way out of the office to ensure it. While we may be expecting him to wreak havoc with the equipment, Homer instead turns the gag into a mild tweak of the Pixar logo.

We take it a little more seriously when Chief Wiggum shows up at the door, except we really don’t. As the doggy-deady App creeps closer, and then backs up and makes a U-turn and resumes its approach, we remember Wiggum is the one of the most ineffectual characters in Springfield. He’s the kind of cop who brings a lollipop to a gunfight. Bart brings this to vivid life by calling him a Big Blue Balloon, and Wiggum himself solidifies our characterization by appreciating the analogy until his fantasy gets deflated.

The family’s farewells to Santa’s Little Helper are very sweet until Homer goes overboard by slipping a little tongue into his goodbye kiss. To be fair, and to bring things back to perspective, so does Santa’s Little Helper. Homer says he’s not an emotional guy but is actually nothing but emotion. The Simpson family has their hearts in the right place throughout. They break off a holiday brunch, Lisa reads “Looking for Mr. Good Boy,” a take on Judith Rossner’s 1975 passive sexual thriller Looking for Mr. Goodbar, and they even have a family prayer. Homer prays to Saint Bernard.

The Dognitive Behavior Therapy Institute is like doggy heaven: wet grass, no fireworks and Lambien for those restless nights. Elaine proves herself a capable therapist who goes the extra mile for the dog. She even reads to him and sleeps on the floor to get inside his head. While Santa’s Little Helper doesn’t get to sniff the butts of strangers, he does have a mother and dog reunion. She was only a mongrel away. Elaine ultimately ends the episode as a lone wolf, walking her 20 or so dogs. This reviewer hopes to see her again someday having tea with the Crazy Cat Lady.

“The Way of the Dog” is also the way of one of the creators of The Simpsons. The late Sam Simon donated the majority of his $100 million fortune to causes having to do with animals. The Sam Simon Foundation matches veterans and the hearing impaired with service dogs. He also gave to PETA, vehemently opposed medical experiments on animals, and believed veganism could solve hunger and climate change. Lisa’s disclaimer about the salami she gives Santa’s Little Helper as a farewell dog treat is also testament to Simon’s (and Paul McCartney’s) legacy.

The Simpsons season 31 finale is dedicated in loving memory to Little Richard, and ends on an upbeat. “The Way of the Dog” is a fully developed story, which neither rushes nor skimps. It has more heart than laughs, though they throw us several bones.