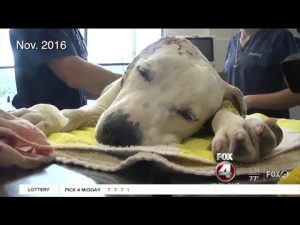 On Friday, the Florida pup will be featured on Disney+’s newest episode of It’s a Dog’s Life, a show that highlights two amazing working dogs and one “Hometown Hero” pooch each episode. Abigail, a bait dog turned therapy pup is this week’s “Hometown Hero.”

Megan said Disney+ had reached out to her about including Abigail on the show in January.

“I’m like, ‘Disney? No, there’s no way Disney has found us in Fort Myers, Florida.’ They wanted to highlight Abigail and her story through this new Disney+ show, It’s a Dog’s Life,” Steinke said. “Abigail does have a wonderful Cinderella story. That’s what I like to call it. Former bait dog to Disney Princess. She’s raising awareness on bait dogs and dogfighting rings, and animal cruelty as a whole.”

“We’re just really happy that Disney chose our little princess to be their next princess,” she added.

Abigail’s episode of It’s a Dog’s Life drops Friday, May 29 on Disney+.