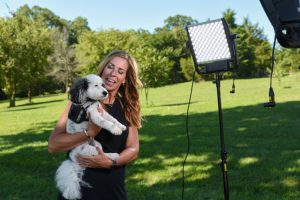 As voting continues for the 2020 American Humane Hero Dog of the Year, a crew from the Hallmark Channel came to Jefferson City last week to record Olive’s acceptance as the therapy dog winner.

Olive, a poodle mix who gained notoriety as a volunteer Court Appointed Special Advocate, seemed nonplussed as she sat in a Cole County courtroom under the bright lights Thursday afternoon.

She sat on a child’s lap as Circuit Judge Jon Beetem explained on camera how Olive calms and distracts children from the drama they find themselves thrust into within the court system. “We’ve worked with Olive for a number of years,” Beetem said. “She is a part of our CASA program — Court Appointed Special Advocates — for our kids in juvenile court.”

CASA is a volunteer-oriented organization made up of a network of people from all walks of life (and one dog) who believe society has a fundamental obligation to make sure children thrive and are treated with dignity and are kept safe. Its volunteers, appointed by judges, watch over and advocate for abused and neglected children. They try to make certain the children don’t get lost in legal and social service systems or languish in inappropriate group or foster homes.

Television people have a distinct idea of what courts look like, Beetem told the crew.

Their views aren’t really reflected in a real courtroom, he continued.

When Olive sits on their laps, she’s usually in a basket.

“That way, she’s comfortable and not worried about falling down,” he said. “Because little kids — they don’t have very big laps.”

Coming into court is among the most traumatic things a child has to do, Beetem said.

“By the time they get to court, their lives have been sort of turned upside down. And they don’t have anywhere to look to for comfort,” Beetem said. “One of the things Olive does — and most of her work is actually done in the hallway — is checking on kids, giving them something to focus on and helping them to relax a little bit while they wait for their turn in court.”

Having Olive in the courtroom is almost like having a Teddy bear. Olive is there. She has no agenda. She’s ready to be held and loved, Beetem said.

“It helps the children relax before they get to court, which is not relaxing,” he said. “They have a lot of anxiety. By the time we get them in here, sit them down and have Olive on their lap, they’ve relaxed a little bit,” he said. “Then we’re able to have a conversation. That’s the only way I learn what these kids are thinking.”

Voting for Hero Dog of the Year continues through Sept. 10. Voting is available daily.