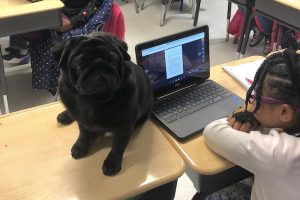 It’s where he makes a difference in the lives of 900 students every day.

The new student who came to the media center crying after putting his dog to sleep the night before. He sat with Booker that day, and several more times that week.

The special needs pre-K autistic student who didn’t smile or talk. When the boy visited Booker with his class for the first time, he laughed and said three words: “black,” “dog,” and “book.”

“He has the ability to see that somebody is not having a good day or somebody needs some attention,” said media specialist and owner-handler Meghen Bassel.

A typical day for the four-year-old licensed therapy dog is nonstop storytime, snores, and snuggles. But Booker wasn’t always the beloved and bookish therapy dog he is now.

After spending more than a decade as a software engineer, Meghen felt it was time for a change. She wanted something rewarding where she could work with children and dogs.

She decided to become a media specialist and knew she would find a way to incorporate dogs into her school’s media center.

“I did a ton of research and discovered that therapy dogs could come and visit media centers,” said Meghen. “The biggest issue was that they only come maybe once a week or once a month.”

That was when Meghen decided she would have the first full-time therapy dog in a media center.

At Meghen’s elementary school in Covington, Georgia, 71 percent of the students have free and reduced lunch, according to the National Center for Education Statistics. Two-thirds of Georgia’s third-graders aren’t reading at their grade level, according to Get Georgia Reading.

Meghen pitched the idea to the school superintendent and board of education. After educating them about therapy dogs and their role in a school setting, Meghen gained approval from district officials.

Meghen had to find the perfect dog  for this pilot program.

She researched a list of the qualities she’d need in her therapy dog: healthy, well-bred with a non-threatening face and temperament, and a small and sturdy size. That led her to the most loyal and curious canine companion: the Pug.

She began contacting reputable Pug breeders. After an extensive eight-month search, Meghen found a breeder in Ohio willing to donate a one-year-old black Pug to the cause.

Since his breeder had started showing him in conformation, Meghen promised she’d try for his championship title.

“If he can do this, then this tells me he’s very trainable and he’s confident,” said Meghen. “He will have what he needs to move on to more difficult tasks.”

Booker proved that he had what it took to pass not only the CGC, but the four-hour test that made him certified by Therapy Dogs International (TDI).

Soon, Booker earned the show championship title Meghen aimed to accomplish for the breeder. She also wanted to fulfill a promise she made to herself: to expose her kids to the limitless possibilities they can aspire to.

“They need to see that just because they come from a different world than other people do that they still can accomplish the same things,” she said.

Meghen knew what to expect at Westminster; as a Welsh Springer breeder, she’d shown at Westminster before. But this was her first time showing a toy breed and Booker’s first time entered as a special. For many of the kids, it was their first time honorarily owning a dog.

“These kids all think he’s part theirs because so many of these kids don’t have access or the ability to own a dog, much less a well-bred, well-socialized purebred dog,” said Meghen.

Booker — named after books and educator Booker T. Washington — helps his students with their reading skills by quietly listening to them as they read. Students can even earn one-on-one time with Booker as a reward. He infuses a level of excitement into the media center and has even led to an increase in book circulation — especially nonfiction books about dogs.

They created good luck cards for Booker and signed banners of encouragement. “That’s my dog you’re showing at the greatest dog show.”

The students livestreamed the Pug judging from their classrooms.

“I knew I had 900 kids with their hearts beating up in their chest watching me,” said Meghen. “I was a little nervous. I’m not nervous with my other dogs at all but with him I was.”

When the judges announced that Booker won an Award of Merit at the 143rd Westminster Kennel Club Dog Show, Meghen was floored.

The win at Westminster — where Booker placed 6 out of 27 Pugs — attracted Disney’s attention.

Booker and Meghen were featured on the Hometown Heroes segment of the Disney Plus show It’s a Dog’s Life with Bill Farmer, which chronicles working dogs across the nation. Meghen collaborated with a local college media program to provide footage to Disney.

“Seeing the finished product, I felt truly blessed that they included us because I loved this show,” Meghen said.

Booker’s Westminster medallion and ribbons hang in a corner of the media center, along with his pictures and press coverage.

The kids look at the awards and feel proud of their little four-footed friend.

“I gave them this feeling that the world is a lot bigger than just this little place they live in,” said Meghen.

She hopes Booker will inspire the kids to do big things in the future, like attending a far-away colleges, or even showing dogs and participating in dog sports like Rally or Dock Diving.

“We need to catch these children early and show them how great dogs are — all the possibilities that they can do,” she said.

Meghen hopes to inspire others to incorporate therapy dogs into educational settings by presenting at educational conferences in the future. Booker may compete in future dog shows, but his heart remains at home, making a difference in students’ lives.