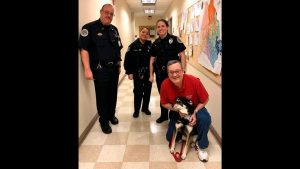 With all the stress from the coronavirus outbreak, a therapy dog in Tennessee  is providing much-needed care to frontline workers.

Canines for Christ Chaplain Ron Leonard and Molly, his rescue dog who has been on 4,900 visits over the last seven years, are delivering cookies to police officers in Nashville on Tuesday. “Personally, during these challenging days of COVID-19, it has been a joy and privilege to make a difference to law enforcement, first responders, and health care workers,” Leonard told Fox News. The duo has been delivering free Buffalo Wild Wings and pizza since the shutdowns began. They recently went to Tristar Summit Medical Center in Hermitage with pizza and honored the doctors and nurses, FOX 17 reported. When Leonard shows up with Molly, he calls it the “ministry of presence” and uses a “vocabulary of silence” just being with those on the frontlines. A lot of healthcare workers and police officers like to pet the dog and get that stress off and letting them know they matter,” he said. Leonard is a retired Army National Guard and U.S. Navy cook who went into ministry when his military service ended. He and his wife, Marilyn, adopted Molly when she was just six weeks old after being left to die in freezing weather alongside her mom. When he discovered Canines for Christ, a ministry that now has 900 volunteers and over 1,000 dogs across the nation, he said, “little did we know she would become a hero to so many.”

Last year, the Murfreesboro Police Department thanked them for visiting the 9-1-1 dispatchers, whom Leonard calls “invisible heroes,” after the department lost one of their officers. Leonard also recently joined the Tennessee Bureau of Investigations as a volunteer chaplain and he and Molly have been asked to help comfort families of missing children with the National Center for Missing & Exploited Children.

From cookies to hugs and just being there, Leonard and Molly have seen countless smiles, tears, and comfort.

“If you don’t think you can minister,” Leonard said, “then you’ve got to think outside the box.”