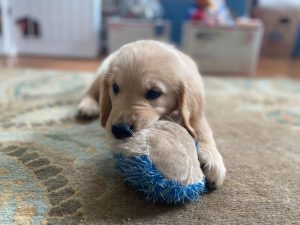 Living with a heart condition, an auto-immune disorder and mobility issues, Angie Hack faces challenges every day. From getting out of bed to going to the store to maintaining her home, tasks can become daunting when she’s just trying to survive.

But, Hack, who lives in Pennsylvania, isn’t alone. She has helpers. Working all hours of the day, she relies on them to make her life easier. For decades, Hack’s golden retrievers have been her saving grace. Her therapy dogs sense when her heart murmurs are coming and comfort her through anxiety attacks and pain flare-ups. When she cannot get up, they lay next to her and use their bodies to get her back on her feet. “They’ve helped me so much, I couldn’t do it without them,” Hack said. “Goldens have so much character and they’re so emphatic. It’s incredible how they just know even when you don’t.”

Living with her own health issues and with two sons on the autism spectrum, the Hack family is no stranger to therapy dogs.

When the COVID-19 outbreak hit in full force, Hack knew her two dogs would help her get through it. But in April her 9-year-old therapy dog, Katie, abruptly died, leaving the Hack family, including her other therapy dog, Sedona, heartbroken. “It’s been really hard. It’s like there’s a void since she passed,” Hack said. “Our dog Sedona hasn’t been the same since. Every night, when I let her out, she goes to the edge of the yard, where Katie’s buried and she just barks. It’s weird, it’s like she’s still looking for her.” While she still had one dog to help with her mobility, she had lost the one that helped with her heart and autoimmune conditions. With financial uncertainty looming overhead amid the pandemic, Hack knew it would be a while before she filled that void and ensured her own safety.

After sharing with her friends on Facebook about the death of her dog, West Point-based Golden Garden owner Leasha Donath knew she had to do something.

She reached out to longtime friend Hack to give her some unexpected news. She was going to give Hack a puppy she had previously planned to keep.

“This woman has gone above and beyond. She has so much going on and still, she is going out of her way to help me,” Hack said. “I couldn’t believe it. She told me, ‘Angie, don’t worry, we’re going to get you a dog.‘”

In 2014, Donath began responsibly breeding golden retrievers to be therapy dogs. Relying on them in her own home, Donath said she understands the need and just how much they can do for people.

According to the American Society for the Prevention of Animal Cruelty, responsible breeding is the focused effort on one breed in order to eradicate common hereditary defects with the goal of bettering the breed’s genetic makeup.

But Donath said it is hard to find breeders who focus on responsible breeding. All too often, dogs are mass-produced, do not have space to run and are sent out to families with underlying health conditions.

For the Hack family, they are all too familiar with this problem. “I’ve had rotten luck with goldens,” Hack said.

Unfortunately, Donath said this happens when breeders do not take into account the potential health conditions associated with the breed.

According to Donath, her dogs’ bloodline does not have the carriers for hip dysplasia, cancer and other commonly found diseases in golden retrievers. While it is less cost-effective, she said it is crucial so folks, like Hack, can have peace of mind when buying a therapy dog.

When folks buy from her bloodlines, she said they leave knowing they will have a long, healthy life.

Additionally, Donath has two specialized bloodlines in order to better accommodate folks’ individual therapy needs. While one of her lines is more laid-back and calm, the other is more energetic.

Whether it be lazing in the sun or romping around, Donath’s dogs spend most of their days playing in her one-acre yard. When it gets hot, she brings out the water hose; a favorite for every retriever, she added.

Jumping through the streams, they run laps through the yard stopping for only a moment to catch the water in their jaws.

With each litter, Donath said it is hard to say goodbye. But there is always one that is too special to give up, whether it is their unique personality or being the underdog.

This year, she held onto an eccentric, larger than life puppy filled with spunk and tenacity. With one black speckle under her chin, Donath said this puppy was one-of-a-kind.

But, after talking to Hack, she knew this puppy wasn’t meant to be hers. It was for Hack and her family.

“I think it holds more value that she gets this dog than for me to keep her,” Donath said. “I mean, this dog is really going to change her life and that’s what we do.”

Hack made the nearly eight-hour trip from her home in Pennsylvania to West Point to pick up her new companion, Paige. Drawing inspiration from one of her favorite places in Arizona, Hack explained Paige means “helper.”

Sitting down to meet her new companion, Hack gave her a good chin scratch. While getting her ready to go, Hack noticed the little black spot under her chin. Fighting back tears, Hack said she knows this dog was meant to go to her.

“Katie had a little black spot on her foot, we’ve never seen that before with goldens,” Hack said. “I know this is her.”

Donath is no stranger to helping out when she can. Last April, Donath surprised another family with their own puppy.

Since then, Donath said the dog has served as a companion and therapy dog for the family.

“Some people might think it’s silly but every time I give someone their puppy, I whisper to the puppies, ‘Don’t forget your job. You’re supposed to change the world one heart at a time,’ and I mean that,” Donath said. “These dogs change people’s lives.”