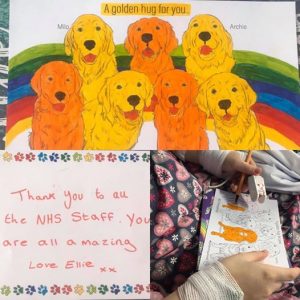 A therapy dog handler has launched an alternative campaign for young hospital patients who are unable to get visits from the dogs during the coronavirus outbreak.

While golden retrievers Leo, Milo, Quinn, Archie, Jessie, Hattie and Pollyanna cannot be at their bedsides, a local illustrator has produced a series of “pawtraits” for the children to colour in and share online.

Handler Lyndsey Uglow has delivered 1,500 drawings, produced by illustrator Daniel Howarth, to children at home and in hospital.

Ms Uglow said: “We wanted to find a way to maintain the presence of therapy dogs, so we had the idea of creating a ‘pawtrait’ of the seven golden retrievers to give to patients which they can colour in themselves and share on social media for their friends and relatives or give to staff as a thank you.

“We are also urging any children who want a fun activity to do at home to use our drawings to write a message to someone they want to thank, can’t visit at the moment, a keyworker or even to the residents of nursing or care homes.

Earlier this month, the pair were crowned winners of the Friends for Life (children’s champion) award at Crufts, a category which recognises a dog that has supported and had a positive impact on children.