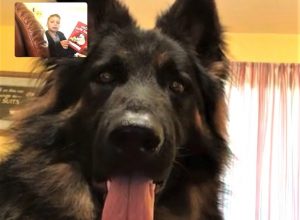 Therapy dogs all over the country are finding unique ways to stay connected with those who need cheering up. Take Zuke for example. Zukunft Von Augustine RN THDN CGCA CGCU TKI ( better known as Zuke) is a two-year-old German Shepherd Dog who was born for Therapy work and is certified through Alliance of Therapy Dogs. Before social distancing was implemented, he was going to Golisano Children’s hospital once a week, doing a “Read to SuperZuke” program at an elementary school once a week, working one-on-one with abused children at the Children’s Advocacy Center, going to church to visit with the members weekly, and being a Lee County Courthouse dog.

He gained his media fame after spending six-and-a-half hours with three abuse victims as they testified against the abuser in trial and was interviewed on television afterward. Now that he is stuck at home, Zuke misses working and interacting with people and children.

That’s when Joy Augustine, Zuke’s owner, got a call from a child 900 miles away asking if she could read to him on Facetime.

“We posted the session of Facebook and it took off,” Joy says. “We had two more children on the second day that wanted to read to him and we will start doing Zoom conferences for those that don’t have iPhones. It looks like it is going to be helpful to those who are homeschooling and trying to learn from home.”

Joy encourages other therapy teams to use the time they previously used for visits to have them virtually listen to a child read to them for 15 minutes. “It’s a positive way to stay engaged,” Joy says.