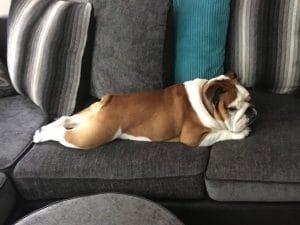 Harold (known as H to his best friends) died in his sleep, at the young age of 6, in the early hours of Wednesday 17th June. Angela Calisi & her son Neo had had H for 3 years, rehoming him after his previous family became ill & couldn’t look after him, as Neo was in need of a therapy dog.

H soon became a vital and loved part of the family, calming Neo and bringing him comfort in social situations, Neo attends a SEN school has autism and the eating disorder ARFID, which often causes him to vomit at night, and H was always on hand to reassure him. Since H died, Neo has been having nightly panic attacks and suffering from extreme anxiety, often worrying that he or Angela won’t wake up the next day. Angela, who also suffers from several health issues, including epilepsy and nerve damage to her feet, was shocked to discover that recently, due to Covid-19, prices of puppies have risen dramatically.