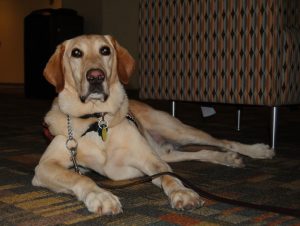 The Canine Performance Sciences Program at Auburn University is an initiative of the College of Veterinary Medicine to expand canine intelligence in areas such as genetics, physical performance and neuroscience.

One of its service animals is Dr. Moose, a golden retriever who has the the ability to detect live viruses.

“Moose was trained to alert when he smelled an odor from bovine viral diarrhea virus by sitting,” said Paul Waggoner, co-director of the Canine Performance Sciences Program. “We do not know what part of the virus the dog can detect. It is most likely that he is detecting some product of the interaction of the virus with living cells.”

This was part of the research that Moose and another dog were observed doing. The dogs were able to differentiate BVDV from other viruses with similar effects in how they reacted to the cells.

When training Moose, the trainers made a game of it. Each time an odor of interest was presented to Moose, a favorite toy was given to him for sitting.

Through repetition of this, Moose started to learn.

The dog was eventually introduced to other odors, so he could distinguish the particular virus that he was trying to detect.

He said the work on the ability of canines to detect pathogens is a huge step in the right direction.

“This capability could be used in protecting against the introduction or spread of disease,” Waggoner said. “This includes animal, human and plant diseases that affect the safety and economic security of the nation.”

According to Waggoner, the training has helped to accomplish advancements of canine detection technology for protecting humans and the foundation of what the United States finds critical.

He said this is compatible with the land grant mission of Auburn University, which is to enhance lives of citizens.

“We have the ongoing projects that investigate the use of dogs for detection of different biological pathogens.” Waggoner said. “This work is being done in collaboration with the FBI Weapons of Mass Destruction Emerging Threats and Technologies Unit based at Redstone Arsenal in Huntsville, Alabama.”

Moose was a part of the first project to show that dogs could be an alert for pathogens and be able to distinguish which kind they are. This project has expanded to the use of dogs in the detection of biological pathogens.

The CPS is still in the research and development phase of this project, but they are currently training more than a dozen dogs to be able to detect some type of biological pathogen.