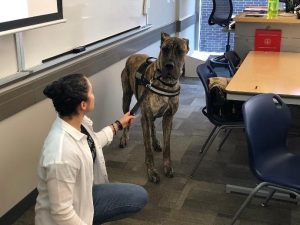 A study from the National College Health Assessment shows less than 2 percent of undergrads said they had no stress in the last year.

The school has a certified therapy dog, named ‘Shade’. He officially became certified over the summer.

One-and-a-half-year-old Shade is Dr. Alissa King’s personal pet He hangs out in her classroom while she teaches and follows her around throughout the day.

Students can come up to pet Shade and sit by him in class when they are feeling stressed out. King has had Shade since he was a 9-week-old puppy. She decided to start training him because she saw a need for a therapy dog at Kirkwood.

“I also was seeing a spike in students that had test anxiety and just anxiety in general, students diagnosed with PTSD, depression, all kinds of mental health things,” she said. “So I started doing research about therapy dogs, and animals, in general, are really helpful for a lot of people.”

Students say they have noticed a morale boost with Shade around.

“It just makes you feel more relaxed just to have him in your presence, he’s just really calm,” said student Alyssa Miller. “If I’m feeling anxious it helps because he just has a calm presence you can tell. He’s just a chill guy.”

King said some people want to take her classes because of Shade. Her plan is to get another Great Dane trained as a therapy dog by the spring. That will let Shade take some days off.