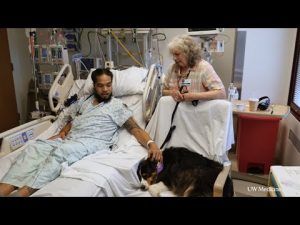 Kepu Savou thought he had come down with a cold. When his symptoms persisted, he visited a doctor and learned that his heart was failing – something Savou never would’ve imagined at age 29.

He has been an inpatient at UW Medical Center, awaiting a donor heart for transplant. While the experience has been difficult at times, he says a program called Paws for Patients has provided much-needed emotional support. Program volunteers bring registered therapy dogs to visit patients who face challenging medical conditions.