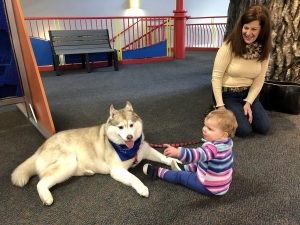 Bushy tailed and flocculent, with an exuberant grin and ever-perky ears, Mishka the Siberian husky could top any stuffed animal in the cuteness and cuddliness department, and she boasts a comforting factor to boot.

For the past five years, Mishka, 6, has been spreading smiles and boosting moods as a certified therapy dog, bringing her infectious presence to the La Crosse Community Thanksgiving Dinner, the Cameron Park Farmers Market and, every other Saturday, to the Children’s Museum of La Crosse. Twice a month at 10 a.m., Mishka, accompanied by owner Mickey Padesky, mills around the Children’s Museum foyer as babies, kids and parents gather around to offer pets, snag a kiss on the nose or simply take a breather by a furry friend.

“It’s kind of a good way to give back,” sad Padesky, whose two previous pet huskies also were therapy dogs. “There’s that unconditional love and nonjudgmental (quality) they bring. (Mishka) is just super friendly and loving. She’s gentle and always so smiley. People are drawn to her.”

As part of the Coulee Region Humane Society’s Ambassadors of Love program, Mishka completed Canine Good Citizen training and testing, and she wears her pet therapy title with pride, perking up when Padesky pulls out her special bandana and harness. An attention-seeker, Mishka uses her irresistible cuteness to her advantage, magically luring a crowd wherever she goes. Even the best of therapy pets can reach their limit under extreme circumstances, and on such occasions Mishka counts on Padesky to read her cues and call a break. During the Children’s Museum’s recent Christmas event, the flood of squealing kids and loud bellows from Santa Claus began to overwhelm Mishka, and Padesky took her aside for a reprieve.

“She depends on me for that,” Padesky said.

While far more genial than the average dog, in some ways Mishka is just that: enamored by snacks — bananas and snap peas are favorites — thrilled by walks and prone to stealing her golden retriever “sister’s” stuffed toys. She follows mainly basic commands, but does have a special trick in her arsenal. One young girl is known to pop over and ask, “Mishka, do you love me?”