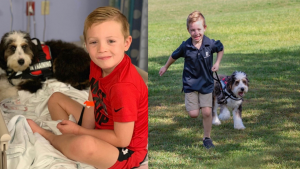 A local family is desperate to find their 7-year-old son’s therapy dog after he got away while at a groomer over the weekend.

According to Laura Holland, her 7-year-old son’s therapy dog, Sully, was mistakenly let out around 9 a.m. on June 27. Sully was at a groomer in Wesley Chapel, in the area of Route 56 and County Line Road. The family hasn’t been able to find any sign of him since.

Holland’s son, Liam, is a cancer patient. According to John’s Hopkins, Liam was diagnosed with a brain tumor at just four years old.

In October, the hospital shared a story about the family meeting Sully for the first time.

“This wonderful dog has pulled Liam out of his shell and turned him around completely,” Holland said at the time. “We can’t believe it.”

The family has been combing wooded areas near where Sully was lost, but they haven’t found anything. They’ve also received a few tips on possible sightings but, so far, nothing has come of them.

On Monday morning, Holland said the family is working with local professionals and trappers as they continue searching.

The family says Sully is microchipped. Holland is asking anyone who sees him to call her at 201-988-8578. She is asking that you only call if you have a lead on Sully’s location.