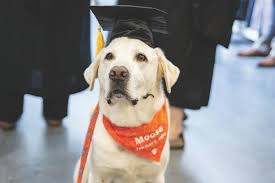 The School Announced Moose, an 8-year-old therapy dog employed by the school’s Cook Counseling Center, was awarded an honorary doctorate in veterinary medicine Friday as part of the school’s virtual commencement ceremony.

Moose, who has been with the school since 2014, is one of four dogs serving at the Cook Counseling Center as working therapy animals and ambassadors for mental health awareness. The canine previously received the Virginia Veterinary Medical Association’s Animal Hero Award in 2019.

“The students here talk a lot about how Moose has broken down the stigma around mental health care on campus,” owner Trent Davis told CNN. “Veterinarians are unfortunately a very challenged population. They have high rates of suicide, and this profession can be quite disturbing. He has really helped the students and staff at Virginia Tech and has gotten a lot of recognition for that.”

The school said Moose is facing his own health problems amid the COVID-19 pandemic: he was diagnosed with prostate cancer just one week after his birthday in February. Officials said Moose is still receiving chemotherapy treatments while continuing his therapy dog work and has been given a “pawsitive” prognosis by veterinarians.