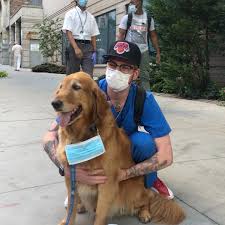 Many pet parents may attest to the fact that receiving affection from their furry friends is an easy route to happiness. Now, one particular pooch named Buddy Gill is going around New York City spreading that special joy that comes from petting a dog.

Buddy is a “gainfully employed” therapy dog from Memorial Sloan Kettering Cancer Center. As a caring canine volunteer, the golden retriever is on a special mission of making patients smile at the centre.

Now, Buddy seems to be expanding the scope of that project. The pooch is not just spreading smiles to patients at MSKCC but to New Yorkers all around.

Many videos of this good boy at work can be found on Buddy’s very own Instagram account, which currently has almost 3,600 followers. Check out these cute clips of the canine spreading joy all across the city, one pet at a time. “I love my friends,” read the caption of the clip which currently has over 2,300 views.

This therapeutic golden retriever has been receiving a whole lot of love from netizens for all the work that he is doing. Here is what Instagram users had to say about this helpful pooch. One person said, “Go Buddy. Go Buddy,” cheering the pooch on.

Another person wrote, “Thank you Buddy”. “The hardest working pup on Instagram,” read a comment under one of Buddy’s videos. He surely is one hardworking pup.

What are your thoughts on Buddy and all that he is doing for the people of New York?