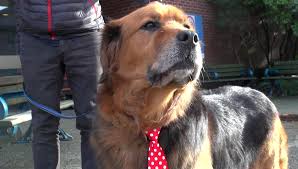 A 100-pound Rottweiler-Shepherd-Labrador cross had been spending his Saturday afternoons visiting seniors in long-term care at Mount Saint Joseph Hospital for the last three years until the pandemic put a stop to it in the spring.

But now Nugget is going virtual.

He and his human, Stuart Mah, have found a new way to have important connections with the folks inside after their in-person volunteer visits were put on hold.

“I think there’s a lot of value in terms of the interaction and being with somebody. A lot of folks here are very lonely. I think with Nugget, he basically engages them,” Mah says. “It’s a great distraction for them. It’s a great hour of time individually with each of the residents that want to see Nugget.”

Mah and Nugget had been visiting up to 100 seniors living on the second floor of the east Vancouver hospital.“Nugget, he just craves attention,” Mah says. “He loves being pet and when he gets the reciprocated effect of somebody really enjoying his company, he hams it up a lot more.”

Nugget is also a hit online, with more than 2,800 following him on Instagram.

Mah says one resident even loved watching Nugget do something simple, like waiting to get a bone. “She broke out into laughter,” he says.

The iPad, speakers, and TVs needed to make the visits happen were provided by St. Paul’s Foundation holiday fundraiser campaign.

Nugget will be continuing his regular on-screen appearances for residents, likely sporting his favourite bandana or slip-on tie.