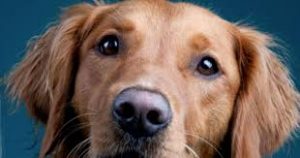 A therapy dog more often called upon to treat ex-armed forces and service personnel with PTSD has been seconded to aid battle-weary healthcare workers.

Ricochet has already made a name for herself. She’s gained fame by her ongoing work with people suffering PTSD, anxiety and phobias working with Pawsitive Teams’ Canine Inspired Community Reintegration (CICR), a partnership program with the Naval Medical Center San Diego. Ricochet’s forte is innate. Usually she works with war veterans with PTSD, but she is also called upon to assist those with varying disabilities. In addition she helps autistic children and those with life-limiting conditions. Often, merely by her physical contact with patients, is she able to turn the tide of mental anguish.

In association with CICR, front-line healthcare workers can now make an appointment with Ricochet via Facetime for some quality staring time.

The team behind the idea cite the claim that to stare into a dogs eyes for 30 to 60 seconds releases oxytocin, a hormone responsible for a feeling of wellbeing and calmness.