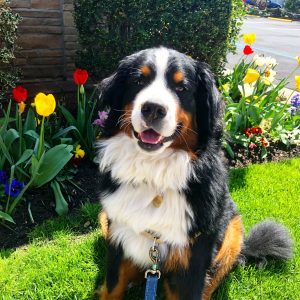 Funeral director Nora Pavone knows well that for her patrons, it can be intimidating walking into the visitation room for the first time.

That is why bereaved clients who walk into the Marine Park Funeral Home in Brooklyn, New York, are immediately greeted by someone who “really can read emotions,” the director old People. It wasn’t another human being that Pavone was referring to but her Bernese mountain dog and canine grief therapy dog, Fiona. Fiona has made the news recently, earning the unique distinction of being the millionth dog to receive the American Kennel Club’s “Canine Good Citizen” certificate. Passing a test that showed she could follow basic commands and actions like greeting a stranger, sitting, staying, and behaving well in crowded situations, including around other dogs, Fiona made Pavone proud, though not surprised.