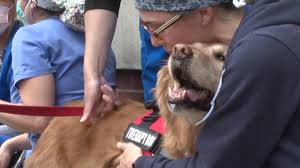 With everything going on in the world, we could all use a little extra love. So, Yale New Haven Hospital found a way to bring back their beloved therapy dogs.

“We have an amazing team of therapy dogs, about 24 between our two campuses and our off-sites, and they are so missed,” said volunteer coordinator Virginia Kulig. “They miss coming in as well so the human handlers tell us the dogs are really missing work so one of my volunteers suggested to me, ‘why don’t we have a parade.’”

The event really was the first of its kind at Yale New Haven Hospital, bringing together more than a dozen of the hospital’s therapy dog volunteers.

Usually, these dogs are very busy.

“Last year between all of our campuses the dogs had about 35,000 encounters, so they’re touching the lives of many people who are in our facilities,” said Kulig.

Now, more than ever, they wanted to do something to show their appreciation for healthcare workers.

“So besides the patients that will be able to see this, this is really for the caregivers who are on those front lines every day as a way of saying thank you,” she said.