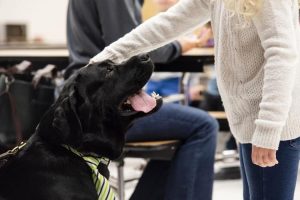 The Massena Central School District Board of Education has approved the first reading of a new policy dealing with therapy dogs, with a pilot program set to begin at the high school in the 2020-21 school year.

“It outlines a very detailed plan. The policy is still a pilot program, so we will have the opportunity to review again after the 2020-21 school year,” Policy Committee Chairman Paul Haggett said.

The policy was drafted after high school guidance counselor Nicole LaPage requested that the board consider allowing her to use therapy dogs to reduce anxiety among some students. She said she would like to pilot the program during the 2020-21 school year.

Under the proposed policy, the trained dog will be free in enclosed areas.

“What’s the definition of enclosed area?” asked board member Kevin Perretta, who voted against approving the first reading of the policy.

Superintendent Patrick Brady said “the spirit of that” was the therapy dog would be in the counseling suite. Ms. LaPage would own, train and certify the dog. The draft policy allows the dog training certification to be affiliated with any of the five American Kennel Club recognized groups.

Mr. Perretta also wondered how they would address a situation in which a student did not want to have contact with the dog. Students could possibly be asked to sign a form indicating if they were comfortable around a dog.

“I think it’s just a matter of course we would not have the student around,” Mr. Brady said.

“We talked about reaching out to families to be sure that there will be no problems with students,” Mr. Haggett said.

Mr. Perretta suggested they should also look at any adverse impact on staff.

“If a concern were to come to light or something of that nature, the policy only sets up the mechanism of the district being able to have this. It doesn’t necessarily mean it has to happen,” Mr. Haggett said.

Mr. Brady said, if administrators felt there was problem, they could say, “We’re not going to have a dog.”

“The board can always change this policy as well. This is going to be a pilot program, If it turns out not to work, the board would change the policy,” he said.

He said Ms. LaPage was willing to come to a meeting and answer any questions from the board members.