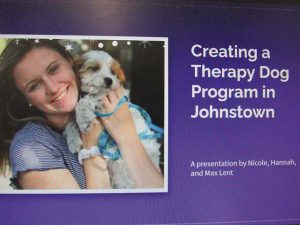 A Greater Johnstown School District administrator is proposing a Therapy Dog Project for the district, using her own dog.

Nicole Lent, director of special education, public services and special programs, gave a recent presentation on the idea to the Board of Education. No formal action was taken by the board.

Lent showed off her dog, Max, and said he could be the “star” of a new dog therapy effort in the school system. She said the district previously had a similar dog, Ross, that went into classrooms at Warren Street Elementary School where she was the former principal. At Warren, she said she saw the “impact” that Ross had. “Since then, we have a new addition to our family, Max,” Lent said.

She said she and her family discussed having Max be a new therapy dog for the district and thought it was a good idea.

Her daughter, senior Hannah Lent, told the board her dog would fit in well with students.

Nicole Lent said that therapy dogs are different than other service types of dogs, such as those that work with the blind.

“The dogs are trained to provide comfort, support and affection while they are providing a service,” she said.

Hannah Lent said there are many proven benefits for students from being in contact with therapy dogs. They include improved reading scores, decreased anxiety and increased attendance.

The district administrator noted that there is currently some increased anxiety for students coming back to school buildings during the COVID-19 situation.

In the case of Max, Lent said her dog would be certified through an accredited program. She said she has taken her dog to school already with her to work and he is getting use to the buildings. Insurance for the therapy dog would be through the Lent family, she said. Max is also a hypoallergenic breed dog, meaning no allergies.

“Max is probably the least scary dog you would ever see,” Lent stated.

She said the way the program works is to have structured visitation, and training with both students and faculty.

“We’re going to work on tracking this,” said Hannah Lent, and findings will be presented to the board.

Board President Christopher Tallon asked about the process of accessing the therapy dog.

“I’m sure the students will love it,” Tallon said.